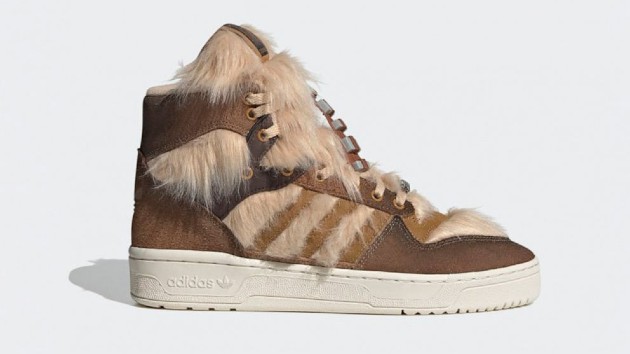 Celebrating 40 years since the legendary Star Wars: The Empire Strikes Back debuted, the new Adidas Originals collection pays homage to the film with four pairs of sneakers that are inspired by fan-favorite characters Lando Calrissian, Boba Fett, Han Solo and Chewbacca.

Since launching on Sept. 18, some styles have already begun to sell out, but many fans are anticipating the release of the Rivalry Hi Star Wars Shoes that are a direct ode to Chewbacca’s classic character on Oct. 22.

Much like the Wookiee warrior’s character, the sneaker features furry-like light brown hair strands on the upper sole and tongue of the shoe.

The tongue of the silhouette also includes a trinket that’s much like the belt Chewbacca wore during Star Wars: The Empire Strikes Back.

The Rivalry Hi Star Wars Shoes will retail for 119.95 pounds which is approximately $155.

Another standout sneaker from the collection is the Boba Fett-inspired Top Ten Hi Star Wars Shoes which feature a bounty hunter look and feel.

The pair has rich tones of olive green, red and light blue like Fett’s body armor as well as a utility pocket near the ankle area of the shoe.

Another unique detail is the Fett’s famous quote from the film, “He’s no good to me dead” that’s featured inside the flap of the extra utility pocket.

The Top Ten Hi Star Wars Shoes also come in an all gold metallic hue, but unfortunately, both options have already sold out. However, fans can sign up on Adidas’ website to find out about the next release.

All of the sneakers from this special Star Wars collection come in special commemorative boxes along with the collector’s posters. If you purchase all four sneakers, the posters included can be lined up together to build one larger complete image.

The Walt Disney Company is the parent company of Lucasfilm and ABC News.