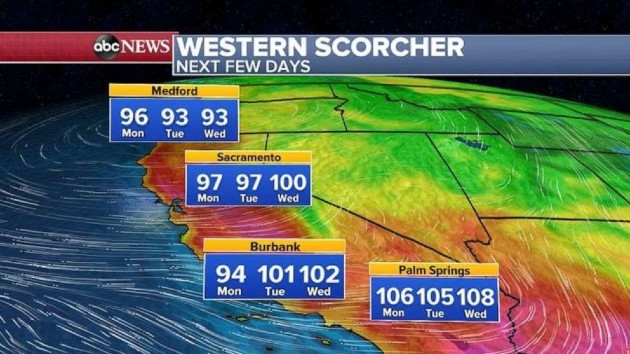 (LOS ANGELES) — There are more than two dozen major wildfires torching California as of Monday, including two newly-formed fires raging in Northern California’s wine country that both started on Sunday.

Over 18,000 firefighters remain on the front lines to combat the 27 total wildfires still burning across the state, officials said.

North of San Francisco, the Glass Fire has burned 11,000 acres of the state’s famous wine vineyards in Napa and Sonoma Counties and is 0% contained as of Monday, according to the California Department of Forestry and Fire Protection, or Cal Fire. Evacuation orders are in effect for large swaths of areas near the blaze, including in parts of Santa Rosa, St. Helena and Calistoga.

The Glass Fire started on Sunday and its cause remains under investigation, authorities said.

The blaze prompted the evacuation of a local hospital, the Adventist Health St. Helena, according to a statement on the health care facility’s website. The hospital said 55 patients were evacuated safely to other hospital locations and their family members have been notified.

Some iconic wineries in the area have also been engulfed in flames as a result of the new fire, The San Francisco Chronicle reported.

Meanwhile, the Zogg Fire also started Sunday in Shasta County, California, and also remains 0% contained as of Monday. It has scorched some 15,000 acres, fire officials said.

Further east in Plumas County, the North Complex fire — which has consumed some 306,135 acres — is now 78% contained, officials said.

There have been more than 8,000 wildfires that have burned over 3.7 million acres across California in 2020 alone. At least 26 people have been killed and more than 7,000 structures have been destroyed as a result of these fires.

On Sunday, record heat and dry gusty winds helped to spread the fires in California. Winds gusts over 50 mph were recorded in northern California with record high temperatures of 101 degrees in Napa and 99 degrees in Oakland.

On Monday, critical to extreme fire danger is expected from southern Oregon to the San Francisco Bay area and down to Los Angeles County. Red flag warnings, heat advisories, excessive heat watch and air quality alerts have been issued for the West, mostly for California.

Temperatures are forecast to approach 100 degrees once again for most of inland California with temperatures near 90 in major cities like San Francisco and Los Angeles.

Temperatures are also forecast to surpass 100 degrees in Burbank on Tuesday and Wednesday with more record highs possible in the region.

Meanwhile, in the Midwest and parts of the South, a strong cold front is expected to bring a major cold blast from Minnesota to Georgia. The coldest temperatures of the season are forecast for most of the area this week with the coldest day and night expected by the end of the week.

Many areas in the Midwest and central U.S. will see their first frost and freeze of the season.