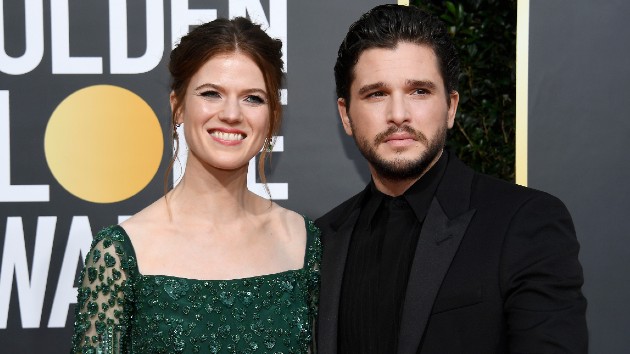 (LONDON) — Brace yourselves, a Game of Thrones baby is coming.  Show alums Kit Harington and Rose Leslie are expecting their first child together.

Leslie, who played Harington’s love interest Ygritte in the HBO series, confirmed her pregnancy when posing for the cover shot for the British publication Make Magazine.

The magazine’s fashion editor Ursula Lake broke the news before the article hit the stands, writing to Instagram on Saturday, “A very special all woman team photographic shoot capturing Rose at this wonderful time as she prepares for motherhood for the first time!”

Lake posted a black and white photo of the Scottish actress, who is wearing an elegant black and beaded gown, standing to the side and happily showing off her pregnancy.

As for whether or not fans will hear from Harington or Rose themselves regarding their little one, neither actor maintains a social media presence and are famous for keeping their relationship out of the limelight.

The two met in 2011 when filming the second season of Game of Thrones and were romantically linked a year later.  Harington and Rose — both 33 — made their red carpet debut as a couple in 2016 and tied the knot on June 23, 2018.

First snow of season expected for Northeast, as coldest air of season forecast for millions
Karlie Kloss is pregnant, expecting first child with Joshua Kushner
Faith, foster care and LGBT rights collide at Supreme Court
Shop smart with these top tools for coupons, cash back, reward points and more
Scarlett Johansson and Colin Jost have tied the knot
Brothers Peter and Benjamin Bratt explain the inclusive conversation they want to have with the rerelease of ‘Follow Me Home’