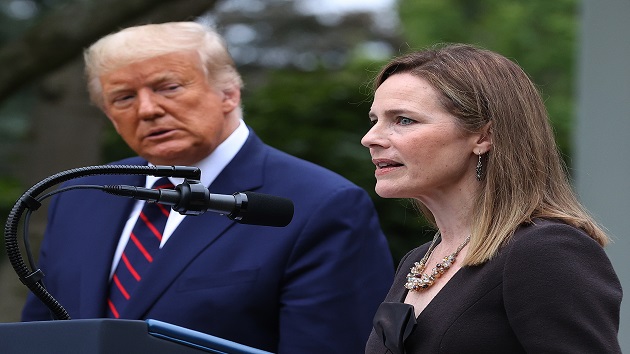 Overwhelmingly, Republicans called Amy Coney Barrett a well-qualified candidate and pushed for a confirmation in “the weeks ahead.” Democrats continued to criticize the timing, with some outright saying they wouldn’t meet with the nominee.

Senate Judiciary Chairman Lindsey Graham, R-S.C., confirmed that the hearings would begin on Monday, Oct. 12 with opening statements from Barrett and members of the Judiciary Committee. The next two days would be reserved for questioning from the committee. Testimony from those who know Barrett and legal experts would either come following questioning on Wednesday or on Thursday.

In an interview with Fox News Saturday night, Graham said, “I expect the nominee will be challenged and that’s appropriate to challenge the nominee. If they treat Judge Barrett like they did Justice [Brett] Kavanaugh it’s going to blow up in their face big time.”

Graham said he hopes to move Barrett out of committee by Oct. 26 — just eight days before Election Day.

On Saturday, Senate Majority Leader Mitch McConnell, R-Ky., promised that Barrett would receive a vote on the Senate floor in the “weeks ahead, following the work of the Judiciary Committee.”

“The Senate will evaluate this nomination on the basis of Judge Barrett’s objective qualifications,” McConnell said in a statement, noting that he plans to meet with Barrett next week. “But it cannot escape notice that this nominee has also already won national admiration for her shining example of strong female leadership at the very top of her field.”

In a statement, Sen. Kelly Loeffler, R-Ga., said she was “proud to support” Barrett, while Sen. Pat Toomey, R-Pa., said in a statement that he looked forward “to reviewing Judge Barrett’s record further in the coming weeks and speaking with her soon as I consider her nomination.”

Former Vice President Joe Biden, however, criticized Trump for moving ahead with the nomination so close to Election Day.

“The Senate should not act on this vacancy until after the American people select their next president and the next Congress,” he said in a statement.

His running mate, Sen. Kamala Harris, D-Calif., said that the next president must select the next justice.

“With the next Supreme Court Justice set to determine the fate of protections for those with preexisting health conditions, and reproductive health options, I will continue to fight on behalf of the people and strongly oppose the president’s nomination,” Harris said in a statement.

Sen. Richard Blumenthal, D-Conn., a member of the Senate Judiciary Committee, said in a statement that he would oppose the confirmation of Barrett, “as I would any nominee proposed as part of this illegitimate sham process.”

“I refuse to treat this process as legitimate and will not meet with Judge Barrett,” he added.

Sen. Tim Kaine, D-Va., said in a statement that “this vacancy should be filled by the winner of the ongoing election,” noting that he would not support a confirmation until the results of the presidential election are known.

Several Democrats, meanwhile, emphasized the impact that Barrett’s nomination will have on several issues, including health care. The Supreme Court is scheduled to hear arguments in a case against the Affordable Care Act on Nov. 10.

In a statement, Senate Minority Leader Chuck Schumer, D-N.Y., said a “vote by any Senator for Judge Amy Coney Barrett is a vote to strike down the Affordable Care Act and eliminate protections for millions of Americans with pre-existing conditions.”

During a press conference Saturday night, Schumer said he believes Barrett will “become very unpopular with average Americans” once they learn of her record on health care. “I hope they will put pressure on their Republican senators to adhere to Justice Ginsburg’s dying wish and let the next president decide,” he added.

Sen. Tammy Duckworth, D-Ill., called the nomination a “transparent grab for power” by Trump and Senate Republicans “so they can achieve their long-sought goal of repealing the Affordable Care Act and ripping away healthcare from millions — including every COVID-19 survivor who now has a pre-existing condition.”

“This is a fight about whether we are going to take away health care from millions of Americans in the middle of the deadliest pandemic in a century,” Sen. Jeff Merkley, D-Ore., said in a statement, echoing Duckworth’s concerns.