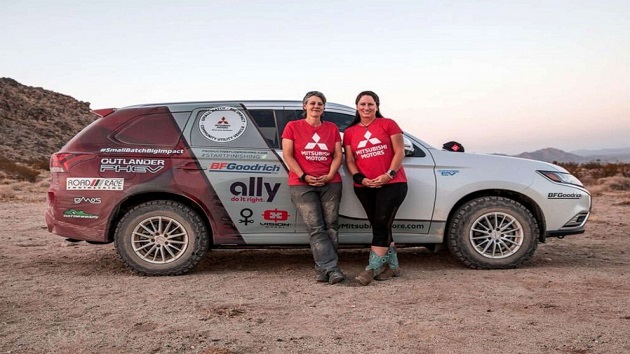 Courtesy of Rebelle Rally
Posted on September 27, 2020 by ABC News

(WASHINGTON) — In less than two weeks, 72 women from across the country will traverse dirt trails, desert sand dunes and barren landscapes in California and Nevada without the aid of technology in this year’s Rebelle Rally, the first off-road navigational rally raid for women in the United States.

Emily Miller, a seasoned endurance racer, founded the rally five years ago to “give women a platform to shine, build and test their skills.” Miller was determined to let her “Rebelles” compete in the grueling, eight-day off-road adventure even as the coronavirus pandemic forced the world into lockdown and disrupted daily life. Teams will have to clear a COVID-19 test before the competition begins Oct. 8 near Lake Tahoe. A COVID coordinator was hired to monitor the health of teams and staff. Face masks will be mandatory.

“We never took this virus lightly,” Miller told ABC News. “We are doing everything to the nth degree. This already is a remote, distanced event. There are no spectators.”

For Emme Hall, the rally had to go on. Not participating was never a consideration for Hall or her navigator, Rebecca Donaghe, teammates since the start and winners in the Crossover Class last year.

“We have all been isolated in our homes and haven’t seen any friends or family,” Hall told ABC News. “I am excited to see so many of these women. We will be in our own bubble when we get there. The Rebelles are a family.”

The event has hosted all-female competitors, ranging in age from 22 to 70 years old, from 188 cities, 38 states and provinces and eight countries since its inception. Miller said the Rebelle was designed to award precision driving and navigation — not speed. Points are determined by the number of checkpoints (there are 200) a team accumulates on the obstacle-like course that spans 1,200 miles. Cellphones and GPS devices are forbidden. Competitors are required to plot their routes via a compass, roadbooks and topographical maps.

“It’s a unique challenge and format. The scoring system pushes people to go for it,” Miller explained, adding that she envisioned the rally to give women “something to sink their teeth into, a badge of honor.”

Hall and Donaghe have introduced another hurdle to the already challenging course: driving the Rivian R1T, a 750 horsepower, four-motor powertrain all-electric truck that can get up to 300 miles of range from its 135 kWh battery. The truck will also be the first to roll off Rivian’s Normal, Illinois, assembly line, with the serial No. 1.

The R1T will not be fitted with additional features or special equipment, according to Brian Gase, chief engineer of special projects at Rivian. Even the on-board air compressor is stock equipment.

“This is such a cool opportunity to put our electric adventure vehicles into some off-road performance validation,” Gase told ABC News. “Range will vary depending on the terrain and the conditions they face, just like it would if they were in a gasoline vehicle. The drivers, the race environment, real world validation, competition with ICE [internal combustion engine] vehicles – all [are] amazing for us.”

Donaghe said there are many similarities between the R1T and the twin-turbo, 6.7-liter V-12 Rolls-Royce Cullinan she and Hall captained in 2019. Last year, every move and every mile were carefully charted to maximize fuel.

“We worried about mileage in the Cullinan,” Donaghe told ABC News. “I even brought a siphon pack kit with me.”

This year, range will determine how far Hall and Donaghe are willing to push the limits to win. The R1T demands “more math and strategy about the checkpoints,” Donaghe said. “We never want to get down to zero battery [charge].”

A few rally participants did pull out of the event, according to Miller, but 36 teams decided to compete, including newcomers Nicole Wakelin, an automotive journalist based in New Hampshire, and her partner, Alice Chase. They’re driving the Infiniti QX80, a luxury SUV making its — and the Japanese marque’s — first appearance in the Rebelle.

“I will be leaving my husband and younger daughter at home … it will be weird not talking to them every day,” Wakelin told ABC News. “This is about me, Alice and the Infiniti — a three-person team. I wanted to do the rally to prove myself that I could do it and go outside my comfort zone.”

Ford marketing employees Erica Martin and Jovina Young will be driving the all-new Bronco Sport 4X4, which had its grand debut in July. The off-roading neophytes have spent weeks with Ford engineers, practicing skills like rock crawling and changing tires, navigating narrow rutted trails and perfecting steep ascents and descents. This year marks Ford’s inaugural involvement in the rally.

“We are a fairly late entry so it’s been quite the cram session!” Martin and Young told ABC News in a statement. “We knew we wanted to enter a professional team but during the planning we came up with the crazy idea to enter a novice team. After all, that’s what Bronco is all about – making off-roading fun and accessible for everyone. Who better to take on this challenge than ourselves?”

Rachael Ridenour, a Rebelle loyalist, has been coaching her driver and teammate, Kristie Levy, on what to expect along the daunting and physically exhausting route. They’ll be helming a Mitsubishi Outlander plug-in hybrid vehicle, the only PHEV in the rally.

“If you don’t drive well, you don’t finish,” Ridenour, a 32-year U.S. Army veteran and founder and CEO of Record The Journey, a nonprofit that provides outdoor photography adventures and training to military veterans and their families, told ABC News. “Solve one problem at a time. You will make mistakes — not if.”

She added: “It’s a collaborative and competitive event that’s fully immersive and amazing. You’re spending 24 hours a day with the same person with the same objective in the same vehicle. It creates a tight knit community.”

The women competing come from all backgrounds and careers, according to Miller: CEOs, lawyers, engineers, moms, military veterans. For 10 days they’ll escape reality, consumed with one goal only: to finish the rally.

Donaghe said the pandemic has been weighing heavily on all the participants. Teams have agreed to minimize contact with strangers and hunker down to protect themselves — and others — from infection.

“Everyone is very conscientious about [the risks],” she said. “This will be an emotional year. All of that bonding will be more intense and more important.”

Wunmi Mosaku would “run for the hills” if she were actually in her Netflix horror movie ‘His House’
‘Boogaloo Bois’ member charged in attack on Minneapolis police building during George Floyd protests
‘The Spanish Princess Part Two’ stars talk representation in the royal court
James Van Der Beek captures his kids’ hilarious reaction to watching his cameo in Kesha’s “Blow”
‘He shot himself in the foot’: Seniors repelled by Trump’s pandemic response
Coronavirus live updates: US reports over 70,000 new cases for 1st time since July