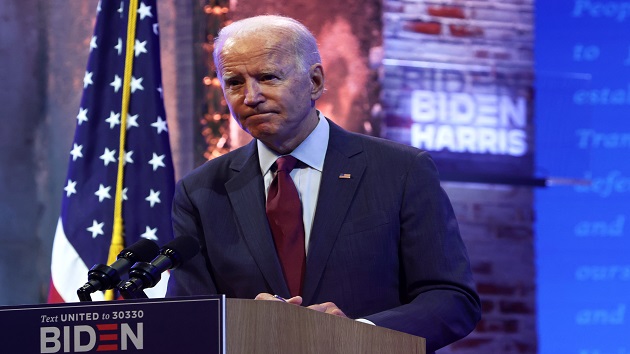 (WASHINGTON) — In his first public remarks since President Donald Trump officially selected Judge Amy Coney Barrett as his nominee to the Supreme Court, former Vice President Joe Biden once again urged Republicans in the Senate not to move ahead with confirmation proceedings until after the 2020 election.

“Just because you have the power to do something doesn’t absolve you of your responsibility to do right by the American people,” Biden charged in his remarks Sunday afternoon in Wilmington, Delaware.

Since the passing of Justice Ruth Bader Ginsburg earlier this month, Biden has sought to simultaneously appeal to voters that the election should dictate how the rare Supreme Court vacancy should be dealt with, and Republican senators to hold their fire on the highly politicized process until after voters make their wishes known, particularly as early voting has already gotten underway in some states.

“[The] Senate has to stand strong for our democracy. They must not act on this nomination until the American people finish the process they’re already begun of selecting their president and their Congress,” Biden said.

“[The] U.S. Constitution provides one chance, one, for the Americans to have their voices heard on who serves a lifetime appointment on the Supreme Court, who makes those big decisions about their health care, their civil rights and much else. That chance is now. That moment is now. And the voters, in my view, are not going to stand for this abuse of power” Biden added.

In his remarks, the former vice president focused in particular on the impact Coney Barrett’s nomination could have on the Affordable Care Act, and current protections for those with preexisting conditions, as her confirmation would shift the court to a solidly conservative majority of 6-3.

“It’s no mystery about what’s happening here. President Trump is trying to throw out the Affordable Care Act and he’s been trying to do it for the last four years. The Republican party has been trying to eliminate it for a decade,” Biden said. “And as I speak, we are still in the midst of the worst global health crisis in a century — a crisis that’s already taken over 200,000 lives, between 750 and 1,000 lives a day and counting,”

The day after President Trump nominated Coney Barrett to the court in a Rose Garden ceremony, Biden only mentioned the judge’s name once and was critical of her public statements on previous Supreme Court rulings upholding the Affordable Care Act, including a 2017 criticism in an article for Notre Dame Law School that Chief Justice John Roberts “pushed the Affordable Care Act beyond its plausible meaning to save the statute,” in his 2012 decision.

Biden has acknowledged there is very little Democrats can do to stop Senate Majority Leader Mitch McConnell from moving forward with the nomination, and continued to demur on the possibility raised by some Democrats of expanding the Supreme Court if Biden is elected in November, arguing he does not want to pull focus from the issues at hand.

“What I’m not going to do is play the Trump game, which is a good game he plays: take your eye off the issue before us. If I were to say ‘yes’ or ‘no’ to that, that becomes a big issue. That’s the headline here,” Biden said when asked about calls to pack the court.

“American people understand that they’re being cut out of this process they’re entitled to be part of, and the cutout is designed in order to take away the ACA and your health care in the midst of a pandemic. That’s the focus. That’s what it’s on, and that’s the deal,” he added.