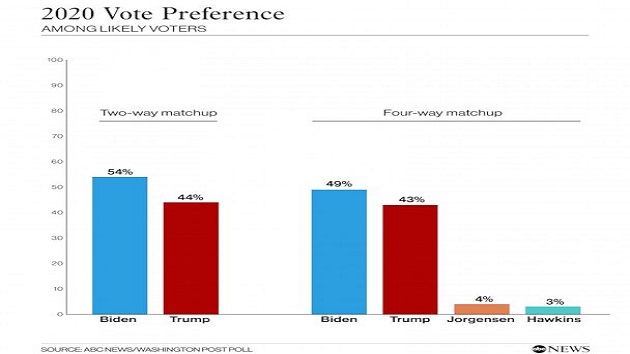 Biden’s 54%-44% advantage over Trump in a two-way contest precisely matches the last national ABC/Post poll in mid-August. Biden’s support slips to 49% when the Libertarian and Green Party candidates are included, versus 43% for Trump.

The results underscore Trump’s precarious position as the first president in 81 years of modern polling never to achieve majority approval for his work in office. He’s at 44% approval among all Americans, ranging from 52% for handling the economy to 40% on the coronavirus outbreak. Fifty-eight percent disapprove of his performance on the pandemic, a key to Biden’s support.

At the same time, the presence of Libertarian candidate Jo Jorgensen and Green Party candidate Howie Hawkins could pose a challenge to Biden in close states. Biden’s 5-point decline when these candidates are included is a significant, albeit slight, shift.

Biden continues to trail Trump, by 20 percentage points, in strong enthusiasm among their respective likely voters in this poll, produced for ABC by Langer Research Associates. Still, another measure finds broad antipathy toward Trump: Among those who don’t support him, 59% say his reelection would be a crisis for the country. Among those not backing Biden, fewer — but still 50% — say it’d be a crisis if he won.

It’s true, as well, that national preferences don’t always reflect Electoral College outcomes, as was the case in 2016 and 2000. Recent ABC/Post state-level polls found virtually even races in Florida and Arizona and a close contest in Wisconsin, although a wide Biden lead in Minnesota, which Trump has sought to contest.

There’s room for changes in preferences, but, as in any highly polarized election, not much. Among likely voters who don’t back Trump now, 6% say they’d consider voting for him. Similarly, 5% of those who don’t currently support Biden would consider him. That makes for a net total of 5% of likely voters who can be considered movable – a thin slice, albeit potentially enough to matter in some states.

What’s likely to matter more is turnout, a question complicated this year by pandemic-related concerns. Just 46% of likely voters plan to cast their ballot in person on Election Day; 50% instead plan to vote early or absentee. Who goes through with it is highly consequential: Trump leads by 19 points, 58%-39%, among Election Day voters, while it’s Biden by more than a 2-1 margin, 67%-31%, among those who intend to vote before then.

The pandemic, of course, has disrupted far more than balloting plans. Sixty-two percent of adults worry that they or an immediate family member may catch the virus, which has claimed more than 200,000 American lives. Likely voters who express this concern favor Biden, 71%-27%.

The economy, even in a pandemic-prompted recession, works better for Trump. While just 40% of Americans say it’s in good shape, that’s up from 31% just last month. And Trump leads by 82%-17% among likely voters who rate the economy positively. Further, a quarter call the economy the top issue in their vote, and those economy-focused voters favor Trump by 80%-18%.

That said, in a head-to-head test, the two candidates run very closely in trust to handle the economy, 49%-46%, Trump-Biden. And other results on trust are revealing: While Trump has hit hard on the issue of crime and safety, it’s Biden who’s slightly ahead in trust to handle it, 50%-44%. Biden leads by eight points in trust to handle the next Supreme Court nomination (as reported Friday), 11 points on the pandemic, 16 points on health care and 20 points on equal treatment of racial groups.

There’s one warning flare here for Biden: His lead on trust to handle the pandemic has shrunk from 20 points during the summertime surge in cases in mid-July, 54%-34%, to today’s 11-point margin, 51%-40%.

As noted, the economy leads as the most important issue, with no consensus on what comes next. Seventeen percent pick the pandemic as their top issue, and likely voters who say so support Biden by 84%-13%. About as many say it’s either health care or equal treatment of racial groups; again more than 8 in 10 in both of these groups back Biden. Twelve percent cite crime and safety as their main concern — and in this group, 84% support Trump. Lastly, 11% focus on the next Supreme Court nomination, with closer vote preferences, 54%-45%, Biden-Trump.

In another delineating result, the public by 54%-42% supports recent protests against police treatment of Black people. Eight in 10 supporters of these protests favor Biden; 77% of opponents are with Trump.

Across issues, these results illuminate the logic of the current campaign, as Trump touts economic recovery and raises crime concerns while Biden pushes on the pandemic response, health care and equal treatment, and both navigate the trickier Supreme Court issue.

The impact of third-party candidates may be tough to gauge, since the pandemic has constrained their campaigns just as it has Trump’s and Biden’s. This survey asked two-candidate preferences first, then re-asked the question with Jorgensen and Hawkins added. Biden, as noted goes from 54% to 49% with these two included; that decline is significant at the 90% confidence level, as opposed to the conventional standard, 95%.

Using two-candidate preferences, huge gaps are evident across population groups. Trump leads by 13 points among men; Biden, by a wide 31 points among women. Trump’s up 6 points against Biden among nongraduates, while Biden leads by 30 points among college grads. The race is close among likely voters age 50 and older, while those younger than 30 back Biden by nearly 2-1 (using registered voters for an adequate sample size).

Notable, too, is that Trump and Biden are dead even, 49%-49%, in households that include a veteran or active-duty member of the military; these generally are thought to be a more pro-GOP group. Trump took criticism in the past month for reports that he had disparaged military service, which he denied.

Among other groupings, Biden leads by 54%-42% in the 13 states that currently are the most contested by the candidates (Arizona, Florida, Georgia, Iowa, Michigan, Minnesota, Nevada, New Hampshire, North Carolina, Ohio, Pennsylvania, Texas and Wisconsin). Moreover, it’s Biden by 20 points in the blue states won by Hillary Clinton, while dead even, 49%-49%, in the 2016 red states. Trump won those states four years ago by 53%-42%.

Comparisons to 2016, based on ABC News exit poll results, are telling. Among the most striking differences:

Trump, at the same time, has retained and even consolidated his core support groups. Overall, among 2020 likely voters who report having supported him in 2016, 91% support him now. He’s backed by 87% of conservatives, who account for a substantial 36% of all likely voters. And while Biden would be just the second Catholic president, white Catholics — an on-again, off-again swing voter group — side with Trump, 55%-44%.

The survey was produced for ABC News by Langer Research Associates of New York, with sampling and data collection by Abt Associates of Rockville, Maryland. See details on the survey’s methodology here.