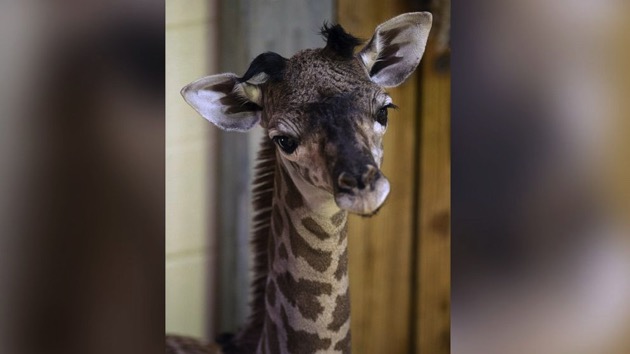 Weighing in at 156 pounds and a little over 6 feet tall, the baby girl is healthy and “feisty,” according to the animal care team at the park.

“First time I came and saw her, she was moving around well through the stall, nursing well,” Karen Jasmine, animal manager at Disney’s Animal, Science and Environment, said. “At her neonatal exam, she was definitely very feisty and strong. I would say she’s pretty brave and an independent animal.”

The yet-to-be-named baby girl giraffe already has a close bond with her mom, Mara. The new giraffe is a third-generation Masai that’s currently at Disney, according to the park.

This little girl marks the 35th giraffe born at Disney’s Animal Kingdom through the Species Survival Plans, overseen by the Association of Zoos and Aquariums to ensure the responsible breeding of endangered species.

“The giraffe here at Disney are ambassadors for their cousins in the wild. Giraffe are undergoing a silent extinction and some sub-species are considered critically endangered. These guys are really important for getting people excited about conservation,” said Dwyer.

You can learn more about how Disney cares for giraffe and other animals and helps protect species in the wild in the new Disney+ docuseries, “Magic of Disney’s Animal Kingdom.” It’s a behind-the-scenes look at what goes into caring for over 5,000 animals at Walt Disney World Resort.

The news comes as Disney’s Animal Kingdom announced on Sept. 22 that three white rhino are expected to give birth at the park as soon as October 2021 — major news in the world of conservation.