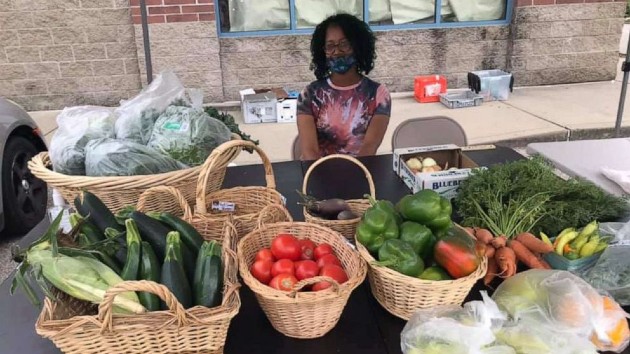 (NEW YORK) — With its mission to “keep family farmers on the land,” Farm Aid works year-round to promote food grown on family farms, support farmers in times of need and promote fair farming policies. It’s also known for the famous concert and festival of the same name, which has been held almost every year since 1985.

This year’s virtual concert — taking place on Saturday, Sept. 26, and featuring performances from the likes of founders Willie Nelson, Neil Young and John Mellencamp, along with fellow board member Dave Matthews — will be especially meaningful for Farm Aid’s 35th anniversary given the number of farmers who have changed their operations due to labor shutdowns to depleted demand. Many of the nation’s agriculturists have been hit by the coronavirus pandemic, and ABC News’ Good Morning America met with the families and community members who run four farms across the country to learn how they have been affected by the crisis and how they’ve pivoted.

Father-son duo Marty and Will Travis run Spence Farm in Fairbury, Illinois, a 160-acre farm that was settled in 1830, and produces such commodity crops as corns, beans and wheat.

“For me, the best part of being here on the farm is being able to speak with Will,” Marty Travis said. “For us to be able to work nearly every day together has been tremendous.”

Along with carrying on their family’s legacy — they are seventh and eight-generation farmers, respectively — the Travises worked as part of a cooperative group with more than 50 other nearby farms that they say delivered in excess of 120 tons of food in 2019 to restaurants in Chicago, such as Rick Bayless’ Frontera Grill and Stephanie Izard’s Girl & the Goat.

But when the pandemic hit, Spence Farm had to “reinvent” and “reimagine” itself.

For the past 18 years, it’s always been restaurants and bakeries and wholesale accounts,” Will Travis said. “After pandemic stuff happened… we had to transition to individuals getting groceries.”

Thankfully, though, some of the restaurants they worked with are starting to reopen, but they’re still getting most of their food into the hands of local families.

“There are many, many farmers who are in rougher straits than we are, and Farm Aid has been their advocate to bring more awareness to the farming community,” he said. “The farmers are feeding the world. Farmers are supporting the community, too. And if we can continue to have that whole circular community, that’s huge.”

Since 2010, Louisa Conrad and Lucas Farrell have operated Big Picture Farm, which they describe as a “small hillside goat dairy and farmstead confectionery and creamery.” Located in Townshend, Vermont, the farm is home to 40 free-range goats that guests can milk and play with, and enjoy “goat cocktails.”

“Goats love to snuggle,” Conrad said. “You just drink your cocktail and snuggle with a goat, and it’s pretty awesome.”

The pair, who met at Middlebury College, said that about 80% of their business used to be wholesale, but their accounts took a hit as stores began closing due to the pandemic, and visits from tourists dropped dramatically. Still, the business has been able to stay afloat and keep staff employed as people have rushed to support small businesses by purchasing products online and frequenting specialty shops that carry them, as well. People have also been signing up for longer-term rentals on their property.

“We weren’t ever worried about our supply chain,” Farrell said. “A lot of food companies, during the pandemic… they were worried about certain ingredients [and] where things might break down in terms of their supply.”

“We could adapt to the new protocol and keep our employees safe. And we know the animals are safe,” Conrad said. “It’s the same reason why the farm stands in Vermont went bananas in March and April, because all of a sudden you had a spot where people could go where it’s like, ‘This is just pure food from this farmer."”

Conrad and Farrell are thankful for the influence of Farm Aid.

“They’ve done a lot of advocacy since the beginning, especially with dairy farmers and dairy pricing,” Conrad said. “They work tirelessly… to make sure that Vermont continues to be the welcoming place that it is for small farms and farmers in general.”

The Black Urban Gardeners and Farmers of Pittsburgh Co-Op, also known as BUGs Pittsburgh and BUGFPC, is an association that has been around since 2015, but has been running the Homewood Historical Urban Farm since 2017.

“We want to supply our community with fresh produce and teach others to grow their food as well,” said Raqueeb Bey, founder and executive director of the BUGFPC.

Bey said that the 31,000-square-foot farm provides food for the neighborhood of Homewood, a residential area of 6,000 mostly Black residents. Bey also said the crops grown — which include collard and mustard greens, kale, peppers, eggplant, lettuce, tomatoes, herbs such as basil, lavender and chamomile, and even honey produced by the farm’s four beehives — offer healthier options to an underserved area.

“Most people are familiar with the term ‘food desert,’ but we call it what it is food apartheid, because this [neighborhood] hasn’t had a grocery store since 1995,” Bey said.

“But there are those who are working to make sure that that doesn’t happen again, to bring fresh food here in Homewood,” she added, noting her participation in various organizations to make sure her community’s needs are heard.

BUGFPC also makes sure community members are fed by hosting a farmers’ market.

The Woven Roots Farm doesn’t just grow food, it also grows its volunteers’ minds about the practices of farming. Doubling as an education center, Woven Roots “is built on honoring the land of the Mohican Nation” through techniques and cultural practices mastered within communities of indigenous people, people of color and immigrants, according to their website.

Jen and Pete Salinetti have run the farm for 20 years, working with a number of groups within their community to spread their message and help others learn how to grow a variety of items.

“We grow over 75 crops,” Jen Salinetti said. “Vegetables… culinary and medicinal herbs, we have flowers [and] we have some fruits.”

The arrival of COVID-19 showed them just how important their mission and their presence is to the region.

“It was so scary… to recognize that we are essential workers and that we fulfill a huge need within the community,” Jen Salinetti said. “We were able to work with a number of different community partnerships to be able to create more direct food access for people that are in high-risk health situations and various forms of food insecurity.”

The Salinettis interacted with Farm Aid in 2018 as their area experienced months of rainfall.

“It was actually at the Farm Aid concert that I learned that there is a hotline as a resource for farmers,” Jen Salinetti said. “I was moved to tears from it. I really had no idea that Farm Aid was in such an intimate place with farms.”

The two also hope to continue building their own relationship with their community.

“My hope for the future of this farm is in the creation of an educational facility that attracts as many people as possible to learn the skills on how to grow their own food,” Pete Salinetti said. “And how to make a living doing it.”

“They’re not gonna get rich,” he added, “[but will] know how to grow their own food and know how to take care of themselves.”