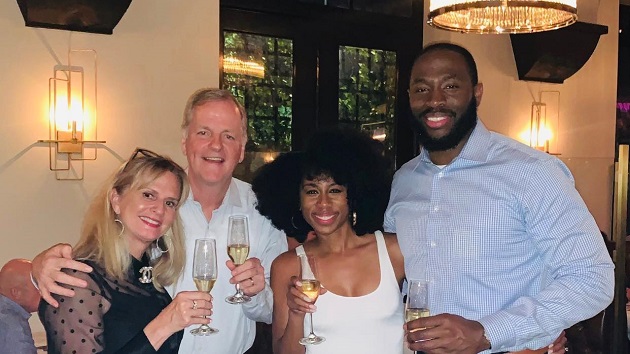 (WASHINGTON) — In June, a black Southwest Airlines flight attendant was moved to tears during a discussion on race with one passenger who only later identified himself as American Airlines CEO Doug Parker.

That emotional conversation has connected them for life, Parker says, and last weekend the two reunited over dinner.

“Much of our dinner focused on how the national conversation on race has become more divisive of late after some very important unifying progress this summer,” Parker wrote. “We can’t let that happen as a country.”

While at work, it wasn’t Parker but the book he was reading , “White Fragility,” that caught her eye.

“So how is the book?” Hill asked after making her way to the back of the aircraft and sitting in the empty aisle seat next to Parker.

Hill recalled him telling her he was halfway through it, but that it “really point[ed] out how important these conversations on race are.”

“As I began to respond, the tears just start[ed] falling,” Hill said.

The two talked for a little over 10 minutes and it wasn’t until the end of the conversation that Parker revealed his identity to Hill.

When Parker disembarked from the plane, he handed Hill a handwritten note telling her that she could email him if she wanted to continue their conversation, adding “much of the problem is we don’t talk about it enough.”

“We are not so different in what we want out of life,” Hill told ABC News at the time. “All we both wanted in that moment was peace and to be understood.”

Since then, Hill says, she has seen some of the Black Lives Matter movement “hijacked by politics and people that are not for real transformative change,” but that she is still trying to “lead with love.”

“As JacqueRae taught us all so well,” Parker said, “having the courage to start conversations on race can change the world. Conversations lead to education, and education leads to action and transformational change.”

Hill is now starting a YouTube channel in an attempt to create a judgement-free space where people can talk about topics such as race.

“Doug thinks I woke him up,” Hill said. “But he woke me up to my purpose in life.”

Biden, under pressure on ‘court packing,’ says he would convene commission on reform
Experts call for climate change debate to move beyond settled science and focus on action
‘Yes, I’m nervous’: Mayor urges calm as outrage grows over police shooting of unarmed Black couple in Illinois
‘News of the World’ trailer shows Tom Hanks on an epic adventure
Netflix lifts curtain on dazzling ‘The Prom’ trailer
Kimberly Van Der Beek revealed the names she and James gave their unborn sons