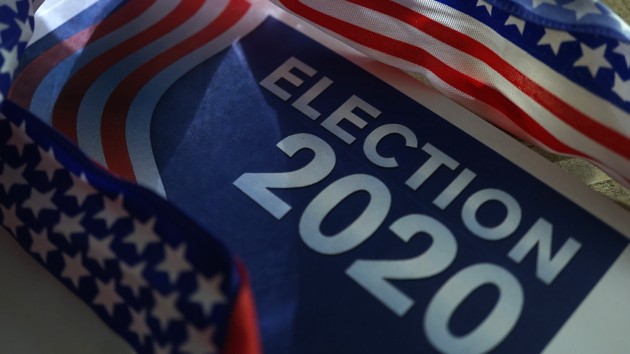 (WASHINGTON) — Both political parties are gearing up for what could be some of the most aggressive post-election legal battles in U.S. history focused on mail-in and absentee ballots in key states — expensive fights that loom large as President Donald Trump struggles to catch up to former Vice President Joe Biden’s sudden cash advantage.

“I would anticipate costly litigation in multiple states in this because frankly, I think the president has telegraphed that to us that his plan is to turn to the court,” said Kathleen Clark, professor of law at Washington University and an expert in legal and government ethics.

Trump in the past few months has frequently referred to legal action against Democratic efforts to expand mail-in voting, just last month tweeting “see you in court” in response to Nevada’s move to expand mail-in voting. More recently, he’s been aggressively pushing to fill late Justice Ruth Bader Ginsburg’s Supreme Court seat ahead of the election, saying he needs “nine justices” considering the amount of mail-in ballots that will be used for this election.

“We need nine justices,” the president said to reporters this week. “You need that. With the unsolicited millions of ballots that they’re sending … you’re gonna need 9 justices.”

Both candidates have recognized that legal costs to litigate the outcome of the 2020 election could be stratospheric. Last week, Vice President Joe Biden’s campaign and the Democratic Party announced they were expanding their legal operation in anticipation of the major fight over voting this fall. The new leadership, including two former solicitors general, oversees a pre-existing team of hundreds of lawyers on the campaign’s national litigation team that has been working with thousands of lawyers in states across the country on voter protection.

But the struggle may pose a special challenge to the Trump campaign. the Trump re-election team has already burned through nearly $1 billion of the over $1.3 billion raised since 2019 and is now contemplating a post-Election Day cash crunch that was once unthinkable. Biden once trailed well behind in funds, but is now well ahead, with access to more than $466 million going into September — $140 million more than the president.

Outside groups from both sides of the aisle also have invested hundreds of millions of dollars for the general election, but their money can’t be used to help pay legal bills for campaigns or parties’ post-election court action. Outside groups can, however, get involved by bringing legal action themselves or attempting to join in legal action brought by others.

On a press call earlier this month following reports of the campaign facing a money squeeze, Bill Stepien, who took over as Trump campaign manager for Brad Parscale over two months ago, said he was “now carefully managing the budget.”

Legal fees have already chewed up a hefty portion of the campaign and RNC’s money — a byproduct of the wide-ranging legal controversies Trump has faced since almost his first day in office. The campaign, the RNC and joint fundraising committees have together spent nearly $50 million on law firms since the 2016 election cycle. Lawyers have been paid $28 million in just the past two years, according to disclosure reports filed to the Federal Election Commission.

Under Stepien’s management, the president’s team has undergone an internal audit that’s led to several belt-tightening measures. The campaign has pulled some planned ad buys in swing states and has limited travel for staff, in part so they can allocate more resources for operations post-Election Day, sources told ABC News.

“Parscale burned through money like this would be all wrapped up on November 3rd. And that just doesn’t look like the case right now,” a source close to the campaign told ABC News, raising questions about whether the campaign will have enough cash to sustain prolonged legal battles.

Parscale declined to comment on the campaign spending. Deputy National Press Secretary for the Trump Campaign Thea McDonald told ABC News they “will be ready for any fight necessary to protect America’s election integrity.”

The RNC brushed off concerns about the cost of post-election legal battles, saying the party has the resources to fight beyond Election Day.

“At the RNC, we have been clear we will spend whatever it takes to protect the integrity of the ballot,” RNC spokesperson Mike Reed told ABC News in a statement. “We are in a strong financial position and have the resources to continue this fight post-election day. We expect Democrats to try every trick in the book to bend the rules in their favor – we plan to be there in court to stop them.”

Former Rep. Barbara Comstock, who had previously served as the chief counsel on the House Government Reform and Oversight Committee that investigated former President Bill Clinton, told ABC News building aggressive legal teams in multiple states — like those from the 2000 Florida recount effort — could easily stretch into the “tens of millions of dollars.”

In the 2000 legal fight between Republican George Bush and Democrat Al Gore — which was waged all the way to the U.S. Supreme Court — both sides placed hundreds of lawyers and other staffers at voting sites across Florida. Comstock said that in addition to billable hours, that also “meant tens of thousands in travel costs, staff costs, and hotel costs.”

Ahead of the 2020 election, both Republicans and Democrats have been asking wealthy donors to direct some money into their respective special legal accounts. Under federal rules, national party committees can set up dedicated legal funds that permit donors to give up to $106,500 each, so long as all agree the money will be spent on election-related legal expenses. Party committees can use their general accounts to pay legal bills, but such legal funds serve as an extra boost for their legal battles because it can accept additional big-dollar contributions from wealthy donors beyond the $35,000 limit for regular funds. Donations to legal accounts are reported as part of the total amount party committees bring in.

Since 2017, the RNC has raised $30 million for this account, mostly from a small number of very wealthy supporters, including roughly $20 million from this election cycle, FEC filings show. The DNC and its joint fundraising committees with the Biden campaign have also raised at least $12 million for the Democratic Party’s legal account this election cycle, with more than $7.5 million from just in the month of August. Due to a lack of disclosure rules on legal accounts, it’s unclear how much of the funds have been spent and how much of that is left.

Nathaniel Persily, a professor at Stanford University, said he does not anticipate the president will experience a shortage of money given the campaign and the party’s ability to continue to accept contributions to help fund legal bills even after Election Day.

“There’s some interesting differences between the candidate campaigns in terms of cash on hand, but if it literally comes down to lawyers being paid, there’ll be no shortage of money,” Persily said.

Republicans prepare for post-Election Day legal fights in battleground states
Halloween inspo: Mindy Kaling dresses up as Devi from her show ‘Never Have I Ever’
Lori Loughlin reports to prison to serve two months for college admissions scheme
Jeff Bridges shares photo from cancer treatment, thanks fans for well wishes
First snow of season expected for Northeast, as coldest air of season forecast for millions
Kim Kardashian received a “Hologram from Heaven” of her late father for 40th birthday