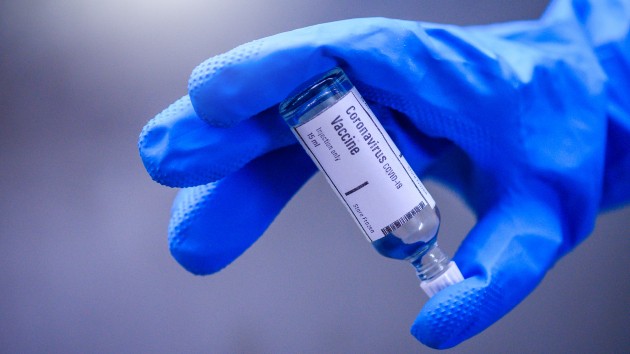 (NEW YORK) — Across the country, a small handful of scientists are brewing up their own homemade and unproven COVID-19 vaccines and giving them to friends, family and themselves.

These scientists hail from disparate groups. Some are shadowy and anonymous, while others are highly organized and Ivy-league affiliated.

“It’s actually simpler than most recipes in home cookbooks,” said Preston Estep, chief scientist and co-founder of a DIY effort backed by a Harvard geneticist.

Estep said he hopes that his group’s unapproved vaccine, which is inhaled through a nasal spray, might give people sheltering at home more confidence and protection.

“In my view, it is unethical to tell people to wait two years for something that’s available today,” said another DIY proponent, entrepreneur and microbiologist, Johnny Stine, in an email to ABC News.

Still, another group says it won’t name its handful of members for fear of Food and Drug Administration retribution.

These DIY groups are united in their belief that traditional vaccine development is too long and cumbersome, and society could have access to a potential vaccine now.

Six months into the COVID-19 pandemic, there are at least three vaccines from major pharmaceutical companies in late-stage trials, but we are still months away from having a vaccine widely available.

But there’s one problem: none of these DIY enthusiasts know for sure if their vaccine actually protects people from COVID-19, or whether it’s safe. And without carefully controlled experiments, they’ll never find out.

Now, Caplan is among a growing chorus of bioethicists condemning the DIY vaccine movement.

“A DIY vaccine is a bad idea,” said Dr. Ruth Faden, founder of the Johns Hopkins Berman Institute for Bioethics. “Unless — and this is the big unless — [it] was connected with some mechanism for moving this into the regular order.”

The DIY nature of these experiments means no one is formally keeping track of what happens to people who take these vaccines — whether they get sick, or if they’re protected from coronavirus infection, explained Jennifer Miller, Ph.D., an assistant professor at Yale School of Medicine and founder of Bioethics International and the Good Pharma Scorecard.

“One of the main reasons why it’s OK to medically experiment on humans is the potential to create generalizable knowledge and advance the common good,” Miller said.

But with DIY vaccines, there’s no standard ethics review board — a 21st century safeguard for human experimentation.

“Research on humans is never OK without an ethics review,” said Miller. “People tend to think that ethics codes and regulations are for barbarians … [but] those codes are for everybody. Even if you are a Nobel prize winner, you are not above the ethics codes.”

The most recent critique, published Thursday in the journal Science, said these efforts are not only unethical, but if unproven vaccines are sold to consumers they also could also be illegal.

“Taking information that you found in some dark corner of the internet but using it to develop your own materials and needing to ship materials or reagents across state lines — that is interstate commerce and is what triggers FDA oversight,” lead author Jacob Sherkow, law professor at Illinois College of Law, said in a statement. “At that point, that’s essentially where the FDA can stop you.”

But the proponents of DIY vaccines argue that there’s an ethical obligation to release a vaccine that can be used immediately even if unproven for efficacy and safety, rather than waiting for the traditional review process that includes a series of FDA-mandated safety and effectiveness studies that can take years to complete.

“I don’t have the millions it takes to even get to the FDA [doorstep] nor would I have the patience to wait two years for a vaccine to a virus that was killing people today,” said Stine, who made headlines in May when he was hit with an FDA warning letter for selling his DIY vaccine.

In June, the Washington attorney general filed a lawsuit against Stine, which he later settled without admitting wrongdoing, but he agreed to repay upon request any of the 30 people he had vaccinated.

Estep doesn’t sell his vaccine, but believes bioethicists critical of the DIY movement “misunderstand the situation.”

“All they are talking about is the risks, but that’s a completely unbalanced perspective,” Estep said. “They’re not presenting the risks of not taking [a DIY vaccine] which are substantial and clear and happening every day.”

But bioethicists warn the potential damage caused by DIY vaccines goes beyond each person who chooses to participate. These efforts could harm public trust, eroding the already fragile credibility of legitimately tested and vetted vaccines.

“Having a small group of scientists and their admirers develop something in the garage, so to speak, is just another avenue for having the public be leery of what is said about vaccines,” said Caplan.

“Look, self-experimentation is an old and sometimes, in some circles, revered tradition in the ethics of research,” Faden said. But “this is not like other kinds of do-it-yourself science. The stakes here are enormous. We can’t get this wrong.”