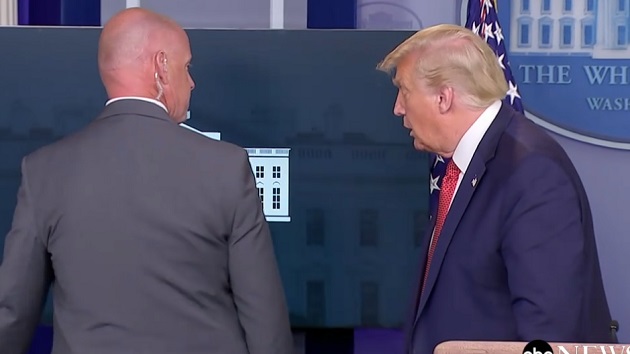 (WASHINGTON) — President Trump says he is so keen on having his yet-to-be-announced Supreme Court nominee confirmed by Election Day in part so that the justice would be on the bench to vote on any legal disputes related to the election.

“We need nine justices. You need that,” Trump told reporters Tuesday, as he went on to stoke baseless claims that the election will be rife with fraud.

“With the unsolicited millions of ballots that they’re sending, it’s a scam; it’s a hoax. Everybody knows that. And the Democrats know it better than anybody else. So you’re going to need nine justices up there. I think it’s going to be very important. Because what they’re doing is a hoax, with the ballots.”

He doubled down on his position on Wednesday, saying, “I think this will end up in the Supreme Court, and I think it’s very important that we have nine justices,” claiming a tied court could be problematic.

“I think it’s better if you go before the election because I think this scam that the Democrats are pulling, it’s a scam, this scam will be before the United States Supreme Court. And I think having a 4-4 situation is not a good situation. If you get that. I don’t know that you’d get that. I think it should be eight-to-nothing or nine-to-nothing, but just in case it would be more political than it should be,” Trump said.

The current court is split evenly between conservative and liberal justices so a newly confirmed justice nominated by Trump could theoretically cast a deciding vote.

The Supreme Court effectively decided the 2000 presidential election when it ruled 5-4 in the case of Bush v. Gore, with conservative justices in the majority.

While the president has persisted in suggesting that “unsolicited ballots” will lead to widespread fraud in the election, his claims are overstated and misleading.

The vast majority of states — 41 out of 50 — require voters to request an absentee ballot before one is mailed to them. In a minority of states — nine, plus Washington, D.C. — ballots will be automatically mailed to registered voters this year; and of those nine states, five already held all-mail elections prior to the coronavirus pandemic.

There is no evidence that mail-in-voting leads to widespread voter fraud.

Trump has not previously so explicitly connected the Supreme Court nomination process to the prospect of a disputed election. Previously, he has said his rationale for an quick nomination process is because he said it is his constitutional duty and he believes it would be good for the country.

Ultimately, Senate Majority Leader Mitch McConnell will set the timetable for the Senate to consider the president’s nominee, who Trump has said he will reveal during a news conference at the White House on Saturday.

The president’s comments Tuesday came in response to a question about Democrats saying the rushed process so close to an election threatens to tear the country apart.

The president brushed off the critique — “Oh, I don’t think so” — before launching into an explanation of why the court may have a role to play in helping to resolve the election.

“So doing it before the election would be a very good thing because you’re going to probably see it, because what they’re doing is trying to sow confusion and everything else. And, you know, when they talk about Russia, China, and all these others, they will be able to do something here because paper ballots are very simple — whether they counterfeit them, forge them, do whatever you want. It’s a very serious problem,” Trump said.

While the U.S. intelligence community has broadly warned about efforts by foreign adversaries to influence the election, there is no evidence that foreign actors are seeking to counterfeit or forge ballots, as the president baselessly suggested.

Even if a nomination is secured by Election Day, the prospect that that nominee would then sit in judgment of a case relating to the outcome of the president’s election raises concerns about politicization of the court.

The president’s former 2016 Democratic opponent, Hillary Clinton, reacted to the president’s comments in a tweet, calling on voters to challenge what she characterized as “authoritarian” behavior by the president by challenging his presidency at the polls.

“The only remedy for this blatantly authoritarian behavior is for voters to turn out for Biden-Harris in such overwhelming numbers that Trump & the GOP can’t steal the election,” Clinton said in a tweet that included a video clip of Trump’s comments.

Alan Morrison, the associate dean of George Washington University Law School, said that if such an event were to come to pass, the recently confirmed justice should recuse herself from the case, though he said he has little expectation she would.

“To many people, it would look as though you were appointed by the president to be on the Supreme Court and his election is now up in front of us and people think that you could sit and judge this objectively, I think there would a lot of protests about that,” Morrison said.