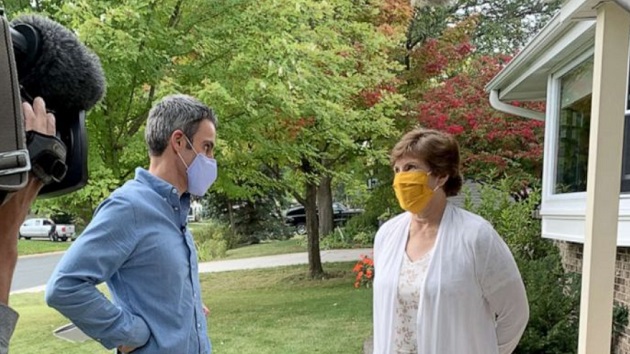 (CHANHASSEN, Minn.) — In small towns and leafy suburbs hundreds of miles from Washington, the death of Justice Ruth Bader Ginsburg has unleashed remarkable expressions of grief and gratitude among Americans of all political stripes.

“I cried,” said Susan Gibbons of Minneapolis of her reaction to the news. “I’m almost crying again now.”

As mourners paid their respects Wednesday at the U.S. Supreme Court where Ginsburg lies in repose, the national outpouring of affection for a woman who spent 27 years at the pinnacle of the legal world remained profound.

“We had been praying a long time that Ruth could make it through; she didn’t,” said Bruce Scoggins, an African American retiree who volunteers at an alcoholism recovery center in the Twin Cities. “I have great prayers and comfort for her family, and for the nation too as a whole, because she had that kind of an effect on the nation.”

Karl Olsen, who spoke with ABC News after casting an early in-person ballot for president, said Ginsburg was cherished justice for modeling civility.

“She was a little left of center, but she did come to the center when it made sense legally,” Olsen said, “and I think she looked at the facts. So I thought she was a fantastic justice.”

From candlelight vigils near Oakland, Calif., to silent prayer circles outside a courthouse in Bloomington, Indiana, and artistic displays in Dayton, Ohio, many Americans have taken to steps to show unity in Ginsburg’s honor.

“Such an incredible woman that so many young women can look up to,” said teenager Josie Hewitt of Oakland.

Ginsburg’s death has been most acutely felt by legions of female professionals, like Jamie Becker-Finn, a mother of two and lawyer specializing in domestic violence.

“It’s devastating, and as a female attorney, what, just she as a person has meant to so many of us,” Becker-Finn told ABC News Live.

Retired accountant Anne Swenson, a devout Catholic who opposes abortion, offered nothing but praise for “RBG” in an interview from the front yard at her suburban Minneapolis home.

“To go to law school back then — that’s an amazing thing. And to face the challenges she did as a woman and then to keep fighting for others,” said Swenson. “They always talk about liberal or conservative judges. But to me, she was just an outstanding member of the Supreme Court.”

University of Minnesota law professor David Schultz shared a cherished personal connection with Ginsburg — a letter the late justice sent him out of the blue in 1999 after he published research on her famously speedy opinions.

“What I love is this first paragraph where she talks about why are her kids complaining that she’s a slow eater,” Schultz said. The line from Ginsburg continues: “Nice to know my slowness at the dinner table is counterbalanced by my opinion production speed.”

As the national conversation turns to the process of naming Ginsburg’s replacement, many of the more than two dozen voters interviewed by ABC News after her death expressed weariness about another political battle ahead.

“I was kind of just like, oh, crap. You know, like, what’s next?” said realtor and mother of three Michelle Fazi of Chanhassen about her reaction to Ginsburg’s death. “It’s 2020. What crisis is coming down the pipeline? I’m not trying to make light of her passing at all, or even bring levity to it. It’s incredibly sad. But it was kind of like, of course, this happened right now.”

Before Ginsburg’s death, majorities in both parties said they supported holding hearings on a high court nominee if a vacancy occurred before the next president is sworn in, according to a Marquette University Law poll earlier this month.

But a vote to confirm a new justice — and potentially change the balance of power on the court — draws mixed reaction.

“I believe we should follow our Constitution,” Swenson said. “The president is obligated to put up a nomination. So, I do believe he should. Whether that process can be completed before November 3rd or after November 3rd, I don’t know.”

When asked about the apparent double-standard among Republicans, who blocked President Barack Obama’s 2016 nominee Merrick Garland from even getting a hearing, Swenson said “both parties play their games.”

Many Democrats, and even some Republicans, disagree.

“It is honestly the most hypocritical thing that they could possibly do,” said Becker-Finn of the race to replace Ginsburg in the next few weeks. “And I think it also, you know, it just sends the message that we don’t care about what the right thing to do is.”

Dawn Lei of Minneapolis, who said she plans to vote for President Donald Trump next month, said she sees both sides of the argument “but I feel like the election is so close that we need — perhaps we should wait.”

The president and Senate Republicans are not waiting, invoking a constitutional duty to fill vacancies on the high court and a mandate from voters who elected them four years ago. Trump plans to announce his nominee on Saturday.

“I think we also have to trust our justices like our justices,” said Fazi. “I understand that they may lean right or lean left. And, you know, they’re appointed by Republican or Democratic presidents, but they are titans of the law. And right, left or otherwise, I trust them to act that way.”