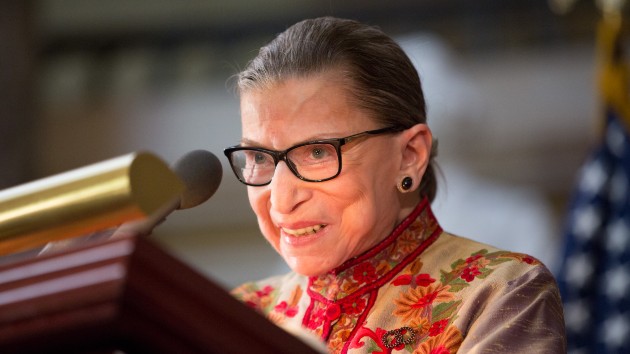 (WASHINGTON) — Three days of public mourning for Justice Ruth Bader Ginsburg, regarded as a champion of equality and women’s rights, begins Wednesday when her casket arrives at the Supreme Court for a dramatic procession up the court steps lined by more than a hundred of her former law clerks.

Her casket will be placed on the Lincoln Catafalque, once used for President Abraham Lincoln, before a private ceremony inside the court’s Great Hall attended by family, friends and her fellow justices at which Chief Justice John Roberts will speak.

Then, in an unprecedented move because of the pandemic, her casket will be brought outside and placed under the court’s portico so the public can pay their respects.

There has been an outpouring of public support at the court since word of Ginsburg’s death came Friday night, and with warm, sunny weather in Washington on Wednesday, large crowds were expected.

Many mourners had started to gather early Wednesday morning near the court steps where there had been a makeshift memorial of flowers and messages in remembrance of the impact she has had on people’s lives in her almost 30 years as an icon on the nation’s high court.

Ginsburg will lie in repose at the court through Thursday and the White House announced that President Donald Trump would go to the court Thursday to pay his respects.

On Friday, Ginsburg will lie in state at the U.S. Capitol, the first woman in history to do so.

Nearby in the Capitol, a bitter political battle continued over her replacement.

She will be interred next week next to her husband at Arlington National Cemetery.

Retailers stock up on smaller turkeys for Thanksgiving due to pandemic
Election 2020 live updates: Biden on offense in Georgia, Trump on defense in Midwest
Netflix drops first look at Christian Serratos embodying Selena Quintanilla in ‘Selena: The Series’
Justice Department no substitute for Trump in defamation case, judge says
Election 2020: How to spot voter intimidation and what to do
Women of color will play crucial role in both presidential and local elections