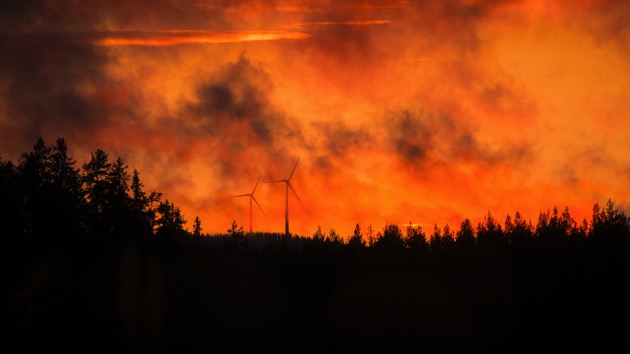 The fire has already destroyed 286,519 acres in Fresno and Madera Counties since it first ignited on Sept. 4. It is only 32% contained so far, according to Cal Fire.

At least 926 structures have been damaged or destroyed, and another 6,723 are threatened.

California is experiencing its worst fire year since the Great Fire of 1910 tore through more than 3 million acres.

More than 50 major fires were burning along the West Coast this week, according to the U.S. Fire, Weather & Avalanche Center.

The smoke from the fires is so thick that it is blocking the sun, cooling what was supposed to be record-high temperatures for the month of April by about 10 degrees, climate scientists told ABC News.

The smoke even traveled 5,000 miles to Europe.

Matthew McConaughey shares that he was sexually abused in his youth
Bill aims to prohibit discrimination in financial services for first time
Goldman Sachs subsidiary pleads guilty to role in $2.6 billion embezzlement in Malaysia
Plexiglass partitions to separate Trump, Biden as they face off in final 2020 debate
New wildfire in Colorado prompts mandatory evacuations
Trump, Biden to face off from Nashville in final presidential debate of 2020