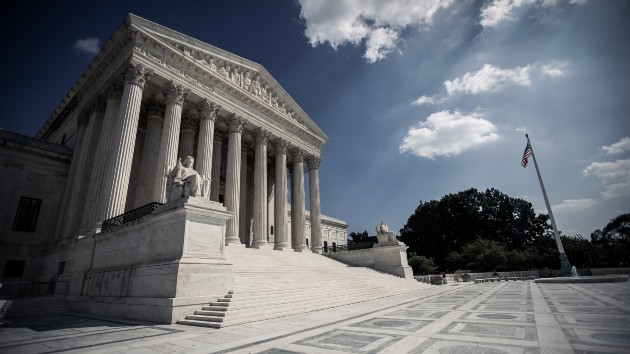 (WASHINGTON) — Hours after news of Supreme Court Justice Ruth Bader Ginsburg’s death on Friday, Republicans rushed to embrace President Donald Trump’s and Senate Majority Leader Mitch McConnell’s plans to fill her seat on the court, despite the looming presidential election. Sen. Martha McSally, R-Ariz., was one of the first GOP senators to support the decision, leaving Democrats scrambling for a plan to avoid welcoming a justice that could erase the decades of progress Ginsburg made for women, minorities and those in need.

She wasn’t alone: Nearly every Republican senator lined behind Trump and McConnell, despite GOP opposition to holding a hearing for President Barack Obama’s Supreme Court nominee, Merrick Garland, eight months from the election in 2016.

That includes all but one of the half-dozen Republicans who, like McSally, are running for reelection in purple states this fall.

Even as they struggle to adjust to the surprise Supreme Court development in the final weeks before the election, Republicans running for reelection see both a historic opportunity to push the Supreme Court to the right for decades, with a 6-3 majority, and an opportunity to align more closely with Trump on a key issue for their party.

“Voting for a highly qualified woman justice may provide an energy to counteract what continues to be the biggest liability for many of the Republicans in swing seats: Trump,” said Barbara Comstock, a former GOP congresswoman who worked in the Justice Department in the Bush administration, and on the confirmations of Chief Justice John Roberts and Justice Samuel Alito.

Sen. Cory Gardner, R-Colo., who is seen as the most endangered Republican incumbent ahead of November, didn’t have an answer to questions about the vacancy at a candidate forum on Saturday.

But his office was prepared with a press release Monday evening, after he returned to Washington.

“I have and will continue to support judicial nominees who will protect our Constitution, not legislate from the bench, and uphold the law. Should a qualified nominee who meets this criteria be put forward, I will vote to confirm,” he said in a statement released at 7 p.m., local time.

“Once the president puts forward his nominee for the Supreme Court, I will carry out my duty — as a member of the Senate Judiciary Committee — to evaluate the nominee for our nation’s highest court,” Sen. Joni Ernst, R-Iowa, who is running neck-and-neck with Democrat Theresa Greenfield, said on Monday.

Sen. Thom Tillis, R-N.C., who is in a competitive race against Democratic attorney Cal Cunningham, drew Trump’s ire in 2017, after introducing a bill to help protect special counsel Robert Mueller’s investigation, and nearly faced a primary over what some state Republicans considered a lack of support for the president.

But he’s drawn closer to Trump since then, warming up the crowd for him at a North Carolina rally on Saturday after announcing his support for considering Trump’s nominee. There, the president even praised him for “being by my side.”

Sen. Susan Collins, R-Maine, is the only Republican up for reelection this year — and one of two in the Senate, with Sen. Lisa Murkowski, R-Alaska — who has challenged McConnell’s plans to bring a Supreme Court nominee through the chamber, weeks before the election.

“We’re simply too close to the election, and in the interest of being fair to the American people — and consistent, since it was with the Garland nomination — the decision was made not to proceed, a decision that I disagreed with, but my position did not prevail,” Collins said Tuesday on Capitol Hill. “I now think we need to play by the same set of rules.”

By Tuesday, however, it appeared that McConnell had enough support to move ahead with confirming who Trump will name his nominee, especially after Sen. Mitt Romney, R-Utah, said he supports plans to fill the vacancy.

Collins is an exception to what appears to be the rule, having carved out a career as a moderate, pro-choice voice in the Senate GOP, who could also take issue with Trump’s pledge to appoint judges who would “automatically” overturn Roe. v. Wade.

The timing of the Supreme Court vacancy could pose a challenge for Collins, and resurface her vote to confirm Justice Brett Kavanaugh to the Supreme Court in 2018. That move put her in Democrats’ crosshairs in 2020, helping to propel her opponent Sara Gideon, the Democratic speaker of the Maine House. And her decision two years ago may still resonate with moderate voters who could ultimately decide the election.

“People will be reminded in Maine of how important that vote was and they are going to hold it against Collins in all likelihood,” Larry Sabato, director of the University of Virginia Center for Politics, said.

Sabato’s crystal ball shifted Maine’s Senate race in Democrats’ favor on Monday morning, moving it from a toss-up to a lean toward the party.

Trump, too, is squeezing Collins for stepping out of line with his strategy, suggesting she will face electoral consequences.

“I think that Susan Collins is going to be hurt very badly, her people aren’t going to take this. People are not going to take it,” he said on Fox & Friends Monday.

WHERE THE SUPREME COURT FIGHT COULD HELP REPUBLICANS

Whit Ayres, a veteran Republican pollster, said supporting Trump’s nominee and plans for the confirmation process will likely benefit some candidates — particularly those like Sen. Steve Daines, a Montana Republican up for reelection against Democratic Gov. Steve Bullock, in a state the president carried by 20 percentage points.

“It depends totally upon what the president’s job approval is in the state you’re talking about,” Ayres said.

In states where Trump’s approval numbers are poor, “it complicates matters substantially because those Republicans need to have 100% of the Trump supporters plus a significant number of Biden supporters in order to win,” he said.

With both sides looking to turn that energy into an electoral edge, that effort is becoming increasingly important in North Carolina, where a tight race could be the one that determines the balance of power in the Senate. Experts view the vacancy as a likely boon for Tillis’ reelection bid, providing the first-term senator, who is trailing his Democratic rival in most polling, with a galvanizing issue for Republican voters still on the fence about him.

“It seems to me that would help him. North Carolina is right on the edge,” Sabato said. “This could be the difference right here — 10, 15, 20,000 votes — keeping North Carolina in the Republican column for president and for Senate. It’s too early.”

As Republicans (mostly) toe the line with McConnell’s path forward, the Democratic challengers across the key battlegrounds are issuing a singular refrain: Wait on the confirmation process until after the election.

Mark Kelly, a top Democratic recruit who is seeking to oust McSally in a special election, argued against rushing the process “for political purposes,” previewing the fights to come over the next month or so.

“This is a decision that will impact Arizonans, especially with an upcoming case about health care and protections for pre-existing conditions,” he said in a statement.

Kelly is in a unique position come the fall, since a special election allows for the possibility of him being seated early — a hurdle that could complicate McConnell’s plans if they extend into a lame duck session.

Barring any significant legal challenges, Kelly could be seated as early as Nov. 30, and both Republican and Democratic election law experts told ABC News that Arizona state law would allow him to take certified election results, showing him as the winner, to the Senate before January, in an attempt to assume McSally’s seat.

“There’s nothing in the statute that says that he has to wait until all the other new senators are sworn in,” Andrew Gordon, a lawyer and a Democrat, said.