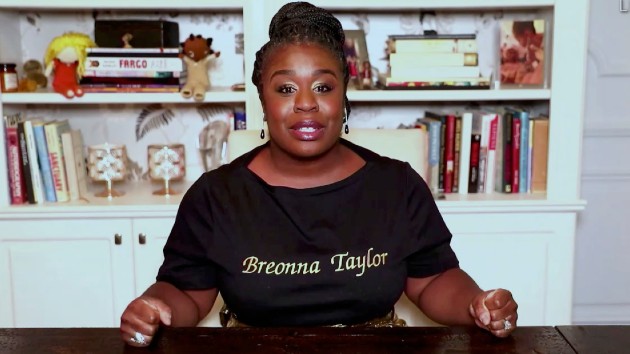 (LOS ANGELES) — Uzo Aduba had a special message for former congresswoman Shirley Chisholm, the woman whom Aduba portrayed in her Emmy winning role on the FX miniseries Mrs. America.

“If I could say something to Shirley Chisholm, it would be: Thank you for doing the hard thing,” Aduba told reporters backstage at the 2020 virtual Emmy Awards. “I would say, thank you, thank you for making it okay to be oneself.”

Aduba, who is now a three-time Emmy Award-winner, believes it was because of women like Chisholm that certain doors are now open to her as a Black woman.

“The truth of the matter is, I had the unique opportunity to play a woman who made it her life’s work to speak, represent and hold space for those people who are often forgotten and left behind or out of the conversation,” the actress says. “And it became very important for me to not close the space on those who are often left behind or forgotten.”

In fact, Aduba acknowledges the challenges she’s had to face, even writing online that “Growing up, I never thought there was a seat for me, so I’ve decided to build my own table.” Now, thanks to another Emmy win, the Orange Is the New Black star says she hopes “to add more chairs for others to come sit.”

“Come and pull up a chair,” she says. “I hope there are more people that are seated here. I think that a continuation, I guess would be another thing of doing and creating work that — being adventurous and daring enough to explore work that I thought was not possible for me.”