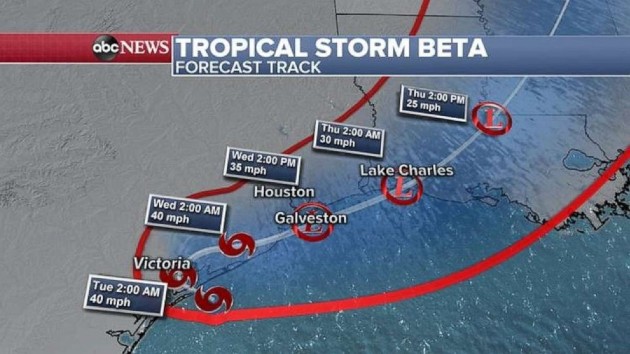 The center of the storm came ashore near the southern end of Matagorda Peninsula, about midway between Corpus Christi and Galveston.

The weak tropical storm had winds near 45 mph and was moving northwest at about 3 mph.

The biggest threat prior to landfall was storm surge and gusty winds.

As Beta moves onto shore, it will stall and sit in one spot for almost two days, which could bring as much as half a foot of rain to Galveston and 6 to 10 inches to Houston.

Houston does not drain well, so that much rain could cause life-threatening flash flooding.

A tropical storm warning has been issued for the island nation and large waves of up to 13 feet are expected all along the East Coast of the United States.

Teddy is also expected to make landfall in Nova Scotia on Wednesday with tropical storm-force winds.