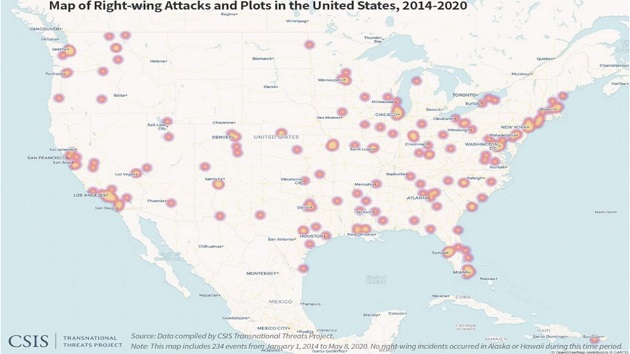 Center for Strategic and International Studies
Posted on September 22, 2020 by ABC News

(WASHINGTON) — Experts who track extremist ideologies and movements as well as domestic terrorism in the U.S. say QAnon is a unique and unpredictable new strain of extremism in America’s far-right political landscape.

The conspiracy theory imagines that President Donald Trump is secretly battling a global network of evil elites, Democrats, celebrities and their “deep state” bureaucratic counterparts — a dizzying conspiratorial alliance of thousands of American citizens who, behind closed doors, are believed to be closeted Satan-worshipping pedophiles who traffic, abuse and sacrifice children, and their enablers.

Past and present far-right extremist movements in the U.S. are “much more anti-government in their perspective,” said Donald Haider-Markel, a University of Kansas political science professor who studies domestic extremism.

“What’s weird about today is that if they are anti-government like QAnon, it’s about a ‘deep state,’ this second government,” he said. “Typically, on the far right, they’re wildly opposed to a strong federal government. But this doesn’t look like that. This is, in fact, a defense of what they see as their government.”

Haider-Markel and other experts said QAnon’s penetration of mainstream American culture and politics is unprecedented in the modern political era for a far-right extremist conspiracy theory.

“The closest thing I could compare it to is [that] this is the way anti-Communism spread,” he said. “Certainly, many people wouldn’t call that extremism, but that brand developed its own extremism, whether it be the John Birch Society or the tactics of McCarthyism in the U.S. Senate. But that… all-or-nothing anti-Communism in the context of the Cold War really is the closest thing to compare this to.”

At the start of the Cold War in the 1950s, Wisconsin Sen. Joseph McCarthy and the John Birch Society were both at the forefront of a hunt for Soviet spies and Communist-sympathizers in America which verged on paranoia, a period scholars describe as the nation’s second “Red scare” of the 20th century.

Brian Friedberg, a senior researcher at Harvard University’s Shorenstein Center on Media, Politics and Public Affairs, who studies the impact of political disinformation from alternative media and anonymous groups, agreed that QAnon is unique among far-right extremists.

“I jokingly call this authoritarian libertarianism — where there’s a libertarian streak of personal freedom and individuality that runs through these communities… exemplified by anonymous postings [and] the whole freedom of speech without consequences,” he said. “But they’re pining for this authoritarian figure who can do no wrong.”

“A lot of these people before [QAnon] used to be just racist libertarians,” Friedberg added.

Like other researchers who spoke with ABC News, Friedberg said he has observed a growing and emboldened militancy among some of QAnon’s followers as the phenomenon has spread and expanded throughout Trump’s first term — especially this year, as QAnon has invaded mainstream American culture and politics.

“One of the most disturbing things I noticed was QAnon folks marching with the Proud Boys,” he said, referring to a far-right white identity group that has clashed frequently with Black Lives Matter demonstrators across the nation this year. “That, to me, is the future.”

“Previously in the alt right era — [from] 2016 up until [the 2017] Charlottesville [neo-Nazi protests] — you had the Trumpian kids on [the website] 4chan, who were called Kekistan… who would march with the colors and symbols they have… their fake flag, their fake nation. They would march with alt-right groups and militia groups at various protests around the country. It was largely considered dumb, larky,” he said.

“They were made fun of by the right and the left. You know, ‘Go back to your mom’s basement,’ that kind of stuff,” Friedberg said. “But then [recently], I saw one guy in particular with one of these [QAnon slogan] shields [symbolically] painted green that had nails coming out of it.”

‘Some extremists may use violence’

The spread of QAnon parallels a dramatic increase in recent years in far-right domestic terror plots and attacks, according to a June analysis by the Center for Strategic and International Studies (CSIS) of nearly 900 domestic terrorism incidents and plots over the past 25 years.

The CSIS analysis concluded that right-wing extremists perpetrated two-thirds of the attacks and plots in the U.S. in 2019, and more than 90% between Jan. 1 and May 8, 2020.

The report — which, according to its lead author, will be updated in September to cover the summer months — suggests that Trump losing the election in November could trigger far-right violence.

“As U.S. Department of Justice documents have highlighted, some far-right extremists have referred to themselves as ‘Trumpenkriegers’ — or ‘fighters for Trump,"” it said. “If President Trump loses the election, some extremists may use violence because they believe — however incorrectly — that there was fraud or that the election of Democratic candidate Joe Biden will undermine their extremist objectives.”

Haider-Markel said that the CSIS analysis is consistent with decades of studies on the rise of far-right violence in modern America.

“General right-wing terrorism is responsible for more attacks in the United States since 9/11 than any other group, movement or ideology… whether you compare it to jihadis or the left wing,” he said, adding that the past two years represent “the biggest growth of extremist group activity since the 9/11 attacks.”

It’s the same conclusion QAnon experts have reached after looking at legions of QAnon Trump supporters and their actions.

“If Trump loses, there is a massive crisis within Q[Anon] when that happens,” said Fredrick Brennan, the creator of 8chan — the anonymous imageboard site where “Q drops” first appeared in 2017.

Brennan relinquished control of the site several years ago, disillusioned by the growing rhetorical violence and hate speech on the site’s board. He is now an active critic of QAnon, who tracks the spread of the movement. He contends that a loss for Trump in November could have significant ramifications for the QAnon movement.

“If Trump loses, I think that how a lot of people are going to view it is: the deep state has won. Trump has lost. Our god, essentially, has been crucified,” he said. Because, “Trump is — for many of them — a god, and they are going to punish Democrats on the other side with political violence. That’s what I see happening.”

Like all forms of domestic extremism in the digital age, QAnon poses a raft of challenges to law enforcement and homeland security agencies.

“Here’s the big issue: QAnon is symptomatic of what is a very decentralized domestic extremist landscape in the U.S.,” said Seth Jones, the CSIS analysis’ lead author and a former director of the International Security and Defense Policy Center at RAND Corporation.

“It’s going to be very difficult for the U.S. government over the foreseeable future to get its hands on this, because it’s not like killing Osama bin Laden or Abu Bakr al-Baghdadi,” he said, referring to the former leader of al Qaeda and the former leader of the Islamic State, both whom were killed by U.S. forces.

“There’s no head to chop off,” he said. “This is a bottom-up, not a top-down movement.”

Both Jones and Haider-Markel agreed that the gun rights movements that took root in the 1990s has intensified both the nature and the visibility of the far-right extremist threat.

“In one form or another, [the] open carry [law] is legal in most states now, so that people can show up at events with firearms in many places,” Haider-Markel said.

A separate report that CSIS released in July reported that despite a 50% drop in terrorism globally between 2014 and 2019, U.S. domestic terrorism rose 141% during that period. Citing data from the National Instant Criminal Background Check System (NICS), the July report concluded that the number of firearm background checks for gun purchases in the U.S. has spiked to its highest level ever in 2020, reaching nearly 4 million in June 2020.

Like some prominent QAnon critics who have faced severe harassment online, this researcher asked to be identified only by his Twitter handle, @dappergander, and his region, New England.

“With all these people running for Congress who say they believe in QAnon, my real fear is the moment when someone says, ‘Do you think we really could arrest all the Democrats? We already have a built-in base of support for that that’s terminally online,"” the researcher said.

“And I don’t think we’re going to get there… but even that conversation happening behind closed doors is really dangerous,” he said. “And if, God forbid, in 2022 even more QAnon people run for office to the point where it’s going to be like the Tea Party, and there’s now a QAnon caucus in Washington?”

At least 24 candidates who have “endorsed or given credence to the conspiracy theory or promoted QAnon content” — 22 Republicans and two independents — having secured a spot on the ballot in the 2020 congressional elections, according to the media watchdog Media Matters, although it’s unclear how many actually have a chance to win their elections. Last month, one candidate who pollsters say is almost certain to win her heavily GOP district in Georgia, Marjorie Taylor Greene, appeared to rescind her previous support for QAnon, telling Fox News that “once I started finding misinformation, I decided that I would choose another path.”

Earlier this month, the former chief of intelligence at the Department of Homeland Security filed a whistleblower complaint alleging that the Trump administration sought to “censor or manipulate” intelligence for political purposes, including downplaying the threats of Russian meddling in the 2020 election, and the threat of violence from far-right extremism.