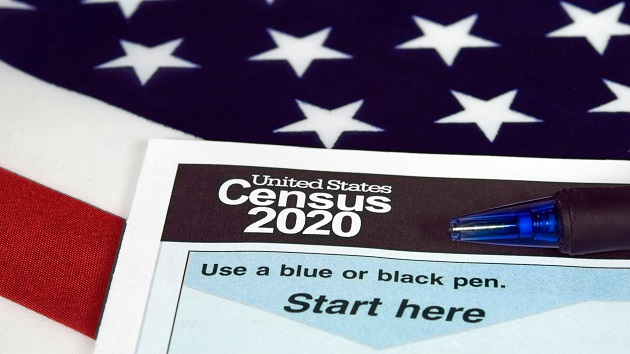 (WASHINGTON) — The Commerce Department’s internal watchdog has warned that the order to cut short the 2020 census did not come from the Census Bureau and even the bureau’s director doesn’t know who ultimately made the call.

In a new report, the department’s inspector general said the decision to accelerate the deadline for data collection increases the risks of an incomplete or inaccurate census.

So far, the 2020 census has counted 95.4% of households in the U.S. either from self-submitted responses or field data collection, according to the bureau’s website.

But in some states, including Alabama, Mississippi, Louisiana, and Montana, that percentage is under 90%.

The once-in-a-decade count is closely watched because it will determine major political and economic fallout for the next 10 years. The census determines how many seats states get in the House of Representatives, and states including New York and California are at risk of losing seats if there’s an undercount.

The census also is used to allocate trillions of dollars of federal funding that keeps schools, health and public safety programs afloat in communities across the country.

Ending the count earlier than expected, some experts say, makes it more likely that those requiring the most effort to reach — immigrants or people live in rural areas, for example — will be left uncounted, underfunded and underrepresented in years to come.

The alert from the watchdog said the inspector general’s office is monitoring “pressing and emerging issues” related to the Census.

In early August, the Census Bureau announced that it would stop collecting responses to the Census on Sept. 30, a month earlier than expected, in order to finish collecting and analyzing data that must be reported to Congress by the legally required deadline of Dec. 31.

The announcement raised alarms from lawmakers and advocates who say the Bureau needed more time to conduct the count, especially in areas hit hardest by cases of COVID-19.

In an inquiry launched into how and why the announcement was made, the inspector general said Census Bureau officials said they did not make the decision to move up the timeline and were concerned it would make it harder to get an accurate count.

“The decision to accelerate the 2020 Census schedule was not made by the Bureau. Senior career officials at the Bureau perceived that this decision resulted from the Administration no longer supporting the schedule extension, but ultimately they lacked visibility into this decision process,” a report signed by Inspector General Peggy Gustafson said.

The alert was first reported by NPR.

Published last Friday, the alert said that before the accelerated timeline was announced, Census Bureau officials thought the Trump administration would support a push from Congress to extend the deadline to give more time to collect and analyze the data.

Officials interviewed by the inspector general said they’re concerned about additional challenges to collecting responses in areas impacted by hurricanes and wildfires this summer.

According to the inspector general, Census Bureau officials were under the impression the Trump administration would support congressional efforts to extend census deadlines to give them more time to conduct operations during the coronavirus pandemic.

But in late July they were asked to brief Commerce Secretary Wilbur Ross on how they could meet the Dec. 31 deadline. After Ross reacted favorably to that presentation, a release was posted announcing the accelerated timeline.

One senior Census Bureau official told the IG’s office the presidential memorandum directing the department to take steps to exclude undocumented immigrants from census calculations that determine congressional representation influenced the administration’s decision not to support extending the deadlines.

The Democrat who chairs the House Oversight Committee, Carolyn Maloney, called the IG alert the “latest red flag” that the changed timeline will degrade the census results.

“This should not be a partisan issue. If the Senate fails to extend the deadline, the 2020 Census will undercount people in red states and blue states—and these communities will lose hundreds of millions of dollars in federal funding they are due for healthcare, job training, education, and other programs over the next decade,” she said in a statement.

Oversight Committee reports have found that as much as a 1% undercount in the census could mean states lose tens of millions or even hundreds of millions of dollars in federal funds.

For already underfunded communities who are desperate to retain what little federal money they get, it can even be a “matter of life or death,” said Stephen Roe Lewis, governor of a tribe in Arizona called the Gila River Community. Lewis testified before Congress last week.

“It is not an exaggeration to say an accurate census can be a matter of life or death in tribal communities because the programs impacted by census count affects delivery of health care, public safety, our youth and elder programs, housing, violence against women grants and other programs that sustain our tribal communities,” Lewis told Congress. “And we have a reason to be concerned that an accurate count will not occur if the Census Bureau ends field operations at the end of this month.”