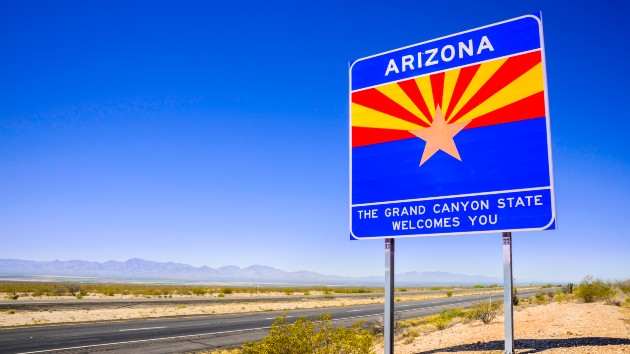 (WASHINGTON) — The tide is changing in Arizona. A state that used to be ruby red, once home to Barry Goldwater and Sen. John McCain, has now adopted a purple hue.

Democrats across the country are feeling the momentum from President Donald Trump’s low marks on his handling of the coronavirus pandemic, and left-wing voters in Arizona are feeling optimistic ahead of Election Day.

There’s a number of reasons for the shift in attitude in Arizona, experts say, but the vote will likely come down to Maricopa County — home to Phoenix, Yuma and Scottsdale, among others — and its diverse population.

“The Democratic Party in Arizona really benefits from all the migration to the state — from the domestic migration to the international migration that’s occurring,” Samara Klar, an associate professor at the University of Arizona, who specializes in political identities, told ABC News.

Maricopa County makes up more than half of Arizona’s population with its nearly 4.5 million residents. Trump won the county by just three points in 2016, but since then, the population has undergone massive changes.

In 2019, according to Pew Research Center, Maricopa County was home to the fourth largest growing Hispanic or Latino population in the entire country. Those who identify as Hispanic or Latino make up nearly 30% of the county’s population, and the median age of Hispanics in the state is lower than it is in many states where the population supersedes one million Hispanic residents.

Polling shows Republican favorability slipping in The Grand Canyon State. This year, it has been one of the hardest hit by coronavirus, with nearly 5,500 deaths, and many criticize Republican Gov. Doug Ducey for reopening the state too soon.

Ducey’s favorability is underwater, at 46%, and voters are completely split on whether or not they believe Ducey has done a good job handling the crisis, according to a Monmouth University poll released last week.

Pew also reports that the economic downturn stemming from the pandemic has hit Latinos and Hispanics especially hard, as the unemployment rate for Hispanics increased from 4.8% in February to 18.5% in April and dropped back to 14.5% in June.

Democrats are making their pitch to voters in Maricopa County, and across the state, to shore up support for Democratic nominee Joe Biden and former astronaut Mark Kelly, who is vying to unseat Ducey-appointed Republican Sen. Martha McSally in November.

Kelly consistently leads McSally in polling, and a majority of Arizona’s likely voters in a New York Times/ Siena College poll released Friday said they would prefer to send a Democrat to the Senate.

Biden is consistently outpacing Trump in polls of the consequential battleground, and Trump’s approval rating is in the mid-50% range as voters grapple with the political and economic ramifications of the pandemic.

Republicans remain in lockstep with the president

Despite the changing atmosphere in Arizona — which could suggest Republicans may be losing support from moderates — the Trump administration is sticking by the president’s side to energize the base.

“The path that the party structure has chosen to take is to double down on red,” Phoenix-based GOP strategist Chuck Coughlin said. “There isn’t a messaging change. And I attribute that to the shadow of Trump.”

That backing has some candidates in competitive races up against a wall, he said.

“Most presidential candidates permit their supporters to articulate differences, even minor differences, but any criticism of this president raises his ire and you become an enemy of the state,” he said.

Though Republican candidates appear to be slipping on the surface, Republican voter registration is still outpacing that of Democrats.

Arizonans broke turnout records with 36% of registered voters casting a ballot. This year, 1.45 million voters returned a ballot in the primary, and the GOP and Democratic split was tight, with 52% of voters casting GOP ballots and 48% casting Democratic ballots.

Kelli Ward, the chairwoman of the Arizona GOP, said the party isn’t taking their registered voter advantage for granted.

Ward has used her position to amplify the president’s message. She won her seat in 2019 after ousting establishment-backed Jonathan Lines, a Yuma businessman, who started his term as the chair in 2017.

She is boosting the campaigns of Republicans up and down the ballot, and is supporting at least two who have reposted or expressed interest online in the QAnon conspiracy theory.

Daniel Wood, who is running against 3rd Congressional District Democrat Rep. Ruben Grijalva, has posted tweets with QAnon’s hashtags. In a Facebook post, he said he follows the group, “mainly for the reason that a very large majority of people who follow it want America free of corrupt politicians and believe in bringing power back to the people.”

Their candidacies are highlighted on the Arizona GOP’s website.

The FBI deems the group a domestic terror threat.

“I don’t know anything about that,” Ward said when asked of QAnon. “But I do know that as the chairwoman of the Republican Party of Arizona, I support Republicans who are running against Democrats who want to destroy our nation with the radical leftist policies.”

Though those fringes don’t represent the majority of the party, the Republicans across the state who elected Ward to her post tend to be some of the most engaged, according to Coughlin.

Coughlin said McCain was the last major party representative to try to pull moderates into leadership positions in the party.

“McCain was the last statewide elected official that engaged in recruitment efforts to bring precinct committeemen who were more centrist back into the game,” he said.

Dan Barker is a registered Republican who plans to cast his ballot for Joe Biden in November. The message of the party isn’t one that resonates with him any longer, and he helped start a PAC called “Arizona Republicans Who Believe in Treating Others with Respect,” which works to organize and recruit voters to cast their ballots for Biden, regardless of their party.

“Our message is that you’ve got to be inclusive, you’ve got to be able to reach out to have a unifying approach to governing our country,” Barker said. “That is not the message of our current president.”

Swing voters in the center demonstrate ideal expansion for both parties

In the 2018 Senate race, when Democratic Sen. Krysten Sinema beat Sen. McSally and Republican Gov. Ducey was reelected, there were nearly 200,000 voters who voted for Ducey and Sinema, splitting their ticket between the parties.

Those voters are ideal pickups for both Democrats and the GOP, and Democrats are honing their messaging to moderates in the fight for turning the state blue.

“Arizona has always had a bit of a maverick brand to it,” Edder Diaz-Martinez, the communications director for the Maricopa Democratic Party, told ABC. “This is the type of state where we’re not necessarily tied down to a political party. And that’s also resonating with folks on the ground, and Latino communities.”

Diaz-Martinez highlighted the recent political change in the state by recalling the actions of some of its prominent Republicans, including the late Sen. McCain’s rocky relationship with the president and former Sen. Jeff Flake’s recent endorsement of Biden.

The Democratic Party has taken a look at Arizona’s affinity for moderate candidates, hoping to use that to their advantage this year in promoting Biden and Kelly.

“It’s really more of the Democratic Party in Arizona that has, in recent years, been trying to portray a more moderate stance,” Klar said. “Mark Kelly identifies as an independent, he’s been an independent for years. So interestingly, I think it’s the Democrats who are trying to put forth more of a centrist or moderate image.”

Democrats in the state may be fighting tooth and nail to pull more voters to their side of the aisle if only for one election, but Republicans historically have the advantage in the state. Before Sinema’s election, Arizona hadn’t sent a Democrat to the Senate since the 1980s.

Despite that advantage, having Trump at the top of the ticket — and some of the implications of tirelessly supporting him — could ultimately hurt the party this election season, Klar said.

“It’s a state where he’s really lost a huge amount of support over time. So yes, there will be some Republicans in Arizona who are supporting Biden, just as we’ll see across the country,” she said.

“But more likely the risks of the Republican Party right now are Republicans who just don’t feel enough enthusiasm to mail in their ballot to show up at the polls,” she added. “They’re just gonna sort of throw their hands up and give up on this election.”

Republicans prepare for post-Election Day legal fights in battleground states
Officer involved in Breonna Taylor shooting sues Taylor’s boyfriend, Kenneth Walker
US produced more plastic waste in 1 year than any other country on Earth: Study
Halloween inspo: Mindy Kaling dresses up as Devi from her show ‘Never Have I Ever’
Omari Hardwick and Loretta Devine agree that laughter was their best medicine in their new horror film ‘Spell’
Lori Loughlin reports to prison to serve two months for college admissions scheme