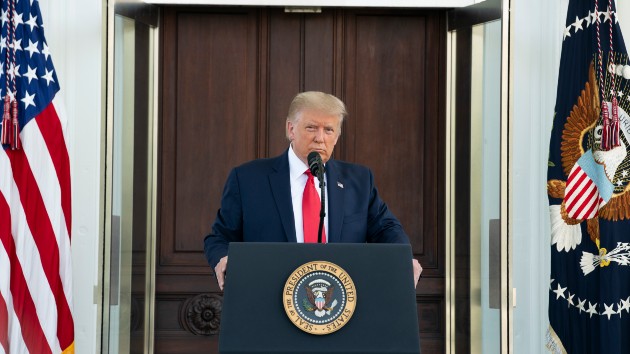 Trump said Monday that he will “probably” reveal his Supreme Court pick on Saturday — out of deference to Ginsburg and memorial ceremonies this week in her honor.

“We’ll make a decision, probably Saturday, but Friday or Saturday,” Trump told reporters as he departed the White House Monday afternoon on his way to campaign in Ohio.

Earlier in the day, Trump told “Fox and Friends” in a long phone interview that he was inclined to wait to make his announcement until the country has had a chance to pay respects to the late justice.

“And we want to pay respect. It looks like we will have probably services on Thursday, or Friday, as I understand it, and I think in all due respect we should we wait until the services are over for Justice Ginsburg,” he added.

The Supreme Court announced later Monday morning that the late justice will lie in repose in front of the court on Wednesday and Thursday and will lie in state at the U.S. Capitol on Friday. A private interment service will be held next week at Arlington National Cemetery.

Trump said he is choosing from among a list of five finalists, all of them women, but signaled there are a couple of front-runners.

Trump said he will meet in-person with at least some of those on his shortlist and that’s he’s already spoken with some of them in recent days.

Barrett is the lead contender on Trump’s list of potential nominees to fill Ginsburg’s seat, multiple sources familiar with the thinking of the president and his advisers told ABC News over the weekend.

Barrett was one of four finalists in Trump’s search for Justice Anthony M. Kennedy’s replacement in 2018.

She was confirmed in October 2017 to the 7th U.S. Circuit Court of Appeals in Chicago and is a former Notre Dame law professor who had clerked for the late Justice Antonin Scalia.

Trump said Monday he could meet with another of the leading candidates ABC News has reported, Barbara Lagoa, when he is in Florida later this week. Lagoa, a Cuban American, serves as a federal judge in Florida.

“I may. She’s highly thought of. And she’s got a lot of support,” Trump said. “I don’t know her, but I hear that she’s outstanding.”

On Fox News Monday morning, Trump made note of the fact Lagoa hails from the must-win state of Florida in explaining how she made it onto his finalists list.

“Well, she’s excellent. She’s Hispanic. She’s a terrific woman, from everything I know. I don’t know her. Florida; we love Florida. So, she’s got a lot of things. Very smart,” Trump said of Lagoa,

Trump again expressed his wish for the Senate to vote on his nominee ahead of the Nov. 3 election.

Asked what his concern would be with a post-election vote, Trump said he had “no concern” but thinks it would be better for the country to have it decided.

“No concern, I just think it would be better. They asked would I rather have it — I’d rather have it before the election. I think it would be better for our country. And we will pick somebody that is outstanding, very qualified. They are all qualified, but somebody that is outstanding. I’d rather see it all take place before the election, so before November third,” Trump said.