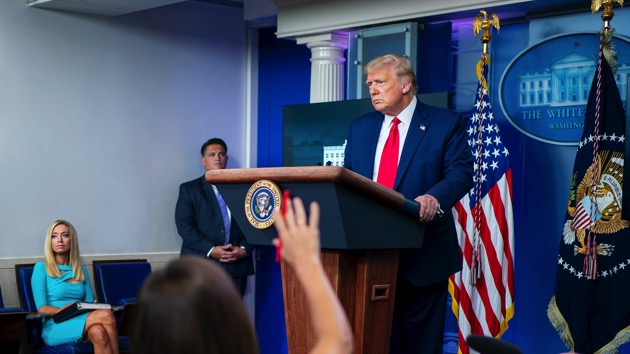 (NEW YORK) — President Donald Trump on Monday gave himself an “A+” grade on his handling of the coronavirus pandemic, saying he and his administration had done a “phenomenal job” even as the death toll neared 200,000 Americans.

At the same time, he gave himself a “D” on what he called “public relations.”

“On the job itself, we take an A+, with the ventilators and now with the vaccines that are years ahead of schedule,” he added.

Once again, he bucked all the experts by ambiguously promising “you’ll have” a vaccine “long before the end of the year, maybe, maybe by the end of October.”

In reality, the only thing public health officials and experts have said could possibly happen by the end of October — under a best-case scenario — would be one or more pharmaceutical companies obtaining enough data from ongoing vaccine trials for regulators at the Food and Drug Administration to evaluate whether the vaccine was safe and effective. If they approve its use, only then could a vaccine start to be rolled out to Americans on a limited basis.

Biden and other Democrats have accused Trump of putting political pressure on the vaccine approval process in order to be able to cite progress on a vaccine before the November election. In recent days, Trump has claimed to have forced the FDA to work faster.

“One of the reasons we’re doing well is because what we did with the FDA,” Trump said Monday. “Normally, if this were Obama and Biden, they wouldn’t have this vaccine for another two and a half years because they wouldn’t have been able to get through the process of the FDA.” He provided no evidence for his claims.

“Total safety, by the way,” he added. “Total safety. It’s number one. But if this were up to them, if they had it instead of us — what I did with the FDA was very good, and we speeded the process up to a point where we’re going to have them in a matter of weeks. They wouldn’t of had it for two and a half years.”