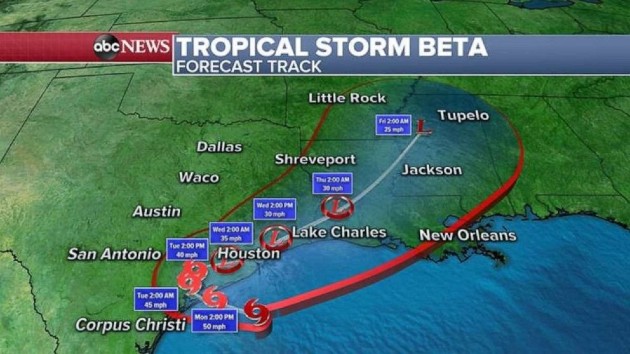 (NEW YORK) — Tropical Storm Beta is slowly closing in on the Texas coast line Monday morning but is not expected to make landfall until later Monday afternoon.

On Monday morning, Beta is looking very disorganized on radar and satellite and it is encountering very unfavorable conditions such as dry air and shear.

Beta’s path shows that it will make landfall sometime Monday afternoon between Corpus Christi and Galveston, Texas, as a weak tropical storm with winds near 50 mph.

The biggest threat before landfall will be the storm surge that we have already seen and gusty winds near 50 mph.

As Beta moves on shore Monday evening, it will stall and sit in one spot for almost two days which could bring as much as 15 inches of rain to Galveston and 6 to 10 inches to Houston.

Houston does not drain well so this much rain could cause significant life-threatening flash flooding.

Elsewhere, Hurricane Teddy is expected to move near Bermuda with gusty winds but the worst of the storm is expected to miss Bermuda even though a Tropical Storm Warning has been issued for the island nation and large waves of up to 13 feet are expected all along the East Coast of the United States.