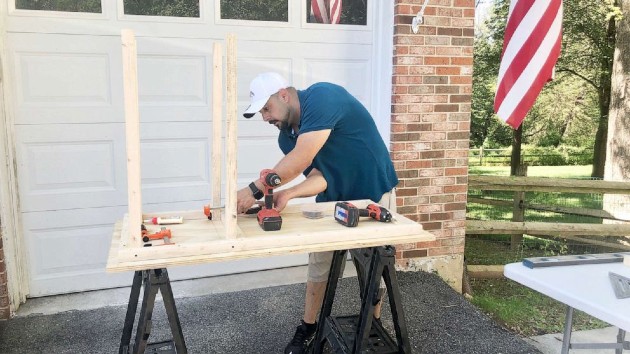 (NEW YORK) — Dozens of students in Maryland learning from home during the coronavirus pandemic are able to study at their own personal desks thanks to a group of local dads.

“I really appreciate them because without them I wouldn’t have a desk right now,” Brandon Sanchez, a seventh grade student who had been working at his family’s dining room table before he received his personal desk, told ABC News’ Good Morning America.

“It feels good,” he said. “I can concentrate more because I’m in my room and there’s no noise around me.”

Brandon and other students have been gifted the desks courtesy of Desks by Dads, a group that is the brainchild of Jessica and Al Berrellez, the parents of three children in Gaithersburg, Maryland.

Jessica Berrellez spent the summer putting together virtual learning kits for students in her daughters’ schools when she realized that most students did not have the basic necessity of a desk.

“A lot of the students in our school who are low income may live in smaller spaces or in households that have multiple families,” she said. “I started talking to families and it was pretty clear that kids were all working together at a table or working at their beds and it became clear that there was a need.”

After scouring second-hand sites and realizing the demand for desks was greater than the supply, Jessica Berrellez asked her husband to make a prototype for a desk that would be relatively easy and cheap to make.

After watching a few YouTube tutorials, Al Berrellez delivered a blueprint for how to build a desk in about one hour for just $40.

The couple shared the blueprint for free on Facebook and with friends and other dads, who began making desks on their own.

To date, more than two dozen desks and counting have been delivered for free to students in the Gaithersburg area.

“Each volunteer who builds a desk makes it better and that’s been awesome to watch,” said Al Berrellez. “Every time someone drops off a donated desk to our house, we get to share ideas and build connections. It’s also an opportunity to highlight the strengths of Black and brown dads, and show what we can contribute.”

“Oftentimes it’s the moms who are sort of responsible for supporting and organizing our children’s education and more actively involved in volunteering, so this is a nice way to get dads involved and to capitalize on their strengths,” added Jessica Berrellez.

The Berrellezes, who both work full-time in addition to doing virtual learning with their children, describe Desks by Dads as a weekend project for them that, thankfully, has exploded in popularity.

They plan to continue to do it locally until the demand is met, but say they hope their self-described “passion project” inspires other people to step up and help in whatever ways they can in their own communities.

“We’re just two, busy parents who saw there’s a need and we care about the children and families in our community and we want to help in a very small way,” said Jessica Berrellez. “I think that’s how change happens. It requires everyday people doing small things and having that grow into something bigger.”

She said the hard work that has gone into the effort has been rewarded every time a student gets a new desk.

“The pride in their faces is awesome. It’s so heartwarming,” said Jessica Berrellez. “I think on a very basic level it’s just about basic dignity and pride of learning.”