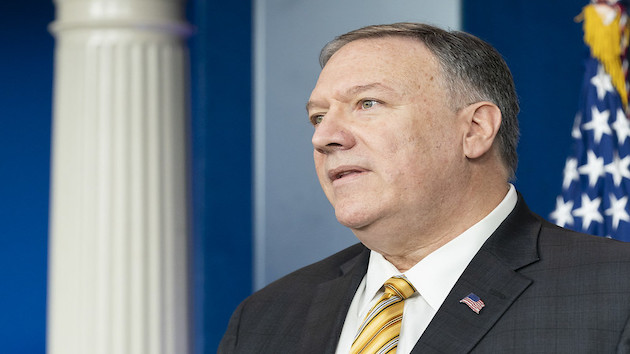 (NEW YORK — Amid a watchdog office’s probe of Secretary of State Mike Pompeo and his wife for alleged “misuse of government resources,” three sources familiar with the situation told ABC News those allegations also involve the department’s chief of protocol and her office.

The little-known office is among the most important at the agency, managing diplomatic engagements like high-level visits, signing ceremonies and state dinners. But its chief, Cam Henderson, and her deputy, Mary-Kate Fisher, have been at the center of a probe by the department’s Office of Inspector General into allegations that Henderson’s predecessor harassed and intimidated staff.

ABC News obtained a copy of the OIG’s draft report, which has not yet been published. It found the two Trump appointees failed to create a safe working environment for employees, including tolerating verbally and physically abusive behavior by the previous chief of protocol.

But while the OIG recommended appropriate action be taken, the State Department, along with Henderson and Fisher, forcefully rejected its findings and questioned the watchdog’s integrity, according to the draft. Pompeo has similarly denied any misuse of government resources.

The draft report consists of two parts — the OIG’s findings, which were sent to Pompeo’s deputy Stephen Biegun on May 6, and the department’s emphatic denial, sent to the OIG on June 30.

It’s unclear why a final OIG report hasn’t been released since then. Steve Linick, the inspector general under whom the report was conducted, was fired in May by President Donald Trump at Pompeo’s request. A spokesperson for the OIG did not respond to questions.

While the department defends Henderson from the OIG’s findings, she and her office are at the center of a separate OIG probe into the Pompeos’ potential “misuse of government resources.” The three sources allege her office has been used for running personal errands, like designing and sending the Pompeos’ personal family Christmas card, as well as helping to arrange controversial dinners for elite guests using taxpayer funds.

Toni Porter, a top Pompeo aide, told congressional committees investigating Linick’s firing that she has been interviewed by the OIG about the Pompeos, according to transcripts published by the House Foreign Affairs and Oversight Committees on Sept. 11. Porter said she at times took “direction” from Susan Pompeo and arranged personal dinner reservations or travel for the couple.

During testimony last Wednesday, Brian Bulatao, a longtime Pompeo confidante who serves as under secretary for management, defended the use of staff to run the Pompeos’ personal errands — and he specifically said that he did so for the Pompeos, because that is the implication — even though federal regulations require that federal employees use their time for official duties and not request subordinates perform personal duties.

“What public employees choose to do on their own time, if it’s not violating their work matters or any other guidelines we placed out, would be up to them,” he told lawmakers about Porter’s role.

But the sources told ABC News that the office of the chief of protocol repeatedly catered to the Pompeos. That includes helping design, facilitate the production of and handle the invoices for the Pompeos’ personal Christmas cards, according to two of the sources.

Porter, who worked for Pompeo when he was in Congress and at the CIA, told lawmakers that she had no problem making arrangements like dinner reservations, but said she was “uncomfortable” with her role in the personal Christmas cards. McClatchy reported earlier this month that it had obtained emails showing Susan Pompeo asking Porter for help mailing the cards — something a career official warned Porter against involving others in.

According to messages provided to ABC News, other officials beyond Porter were roped in, including the department calligrapher and other career staff in the chief of protocol office. The office allegedly even had to pause work on the department’s official Christmas cards at Susan Pompeo’s request to expedite the family’s personal cards, according to the messages.

The office also helped arrange the “Madison dinners,” a series of evenings at the department’s storied reception rooms for elite guests, including Republican officials, CEOs and business leaders, and members of the media.

The department has defended the events as important “foreign policy-focused social gatherings … in the finest tradition of diplomatic and American hospitality.” But the taxpayer-funded dinners reportedly have few foreign dignitary guests, sparking concern among staff about their propriety and earning congressional scrutiny.

Henderson has been key to arranging the dinners, including by working with Susan Pompeo on the guest lists and arranging invitations, menus and entry for the VIP guests, according to one source.

Amid the ongoing OIG probe of “misuse of government resources,” Pompeo has repeatedly denied any wrongdoing, telling Fox News last week that the Christmas cards and dinners are “lawful and appropriate.”

“Everything we’ve done was for the betterment of the State Department,” Pompeo said in the interview. “The fact that they’re picking on my wife, who has done yeoman’s work as a volunteer to try and make life better for every officer at the State Department, I find pathetic and sad.”

The draft OIG report, which was first reported by Politico and the Washington Post, found Henderson and Fisher “failed to report actions by the previous chief of protocol, Sean Lawler, that could be considered workplace violence.”

Lawler resigned last summer after being placed on administrative leave over a department Office of Civil Rights investigation into his alleged harassment of staff, including claims of “threatening” behavior, cursing and “grossly unprofessional” comments, throwing papers and binders and cracking a horsewhip in the office, according to the OIG memo. Lawler called the allegations “ridiculously offensive and untrue” in an interview with the Washington Post.

Both the draft OIG findings and the department’s response state that Henderson eventually removed the whip from Lawler’s office, but the department insists that neither Henderson nor Fisher ever received complaints from staff that they found it threatening. The second source also said Lawler made racist comments about foreign dignitaries and, after Henderson took his horsewhip, brought a soccer ball into the office to kick at staffers’ desks.

The OIG draft report included a lengthy denial from State Department counselor Ulrich Brechbuhl, Henderson and Fisher, who rejected nearly all the OIG’s findings. In particular, while the OIG memo said Lawler’s misconduct was “well-known,” Henderson and Fisher denied hearing multiple concerns from staff and objected to casting some of his behavior as “threatening” or “violent.”

He added the department considers the matters raised by the OIG memo to be resolved after Henderson and Fisher were counseled on proper leadership, with ethics and human resource training.

This is not the first time OIG guidance has been downplayed or ignored.

Assistant Secretary for International Organization Affairs Kevin Moley and senior adviser Mari Stull frequently berated staff and generally engaged in unprofessional behavior toward them, according to an August 2019 OIG report. The department provided counseling to Moley, who denied any wrongdoing, but never disciplined him, while Stull left the agency before the report was complete.

Brian Hook, who served as a senior adviser to Pompeo and special envoy for Iran, was found by the OIG last November to have retaliated against a career staffer for her “perceived political views” and “perceived national origin,” violating department rules.

The department rejected the finding and declined to discipline Hook against the OIG’s recommendation. Two other incidents of retaliation were deemed inconclusive after the department blocked the OIG from “essential information from key decision makers,” it said, while clearing senior officials in two other cases.

‘Goliath’ star Billy Bob Thornton on taking the reins as director for the final season premiere
COVID-19 live updates: Hospitalizations reach another all-time high in Iowa for 2021
CDC advisory panel votes to recommend Pfizer boosters for people 65 and older
New ‘Ghostbusters: Afterlife’ posters show Paul Rudd and the new cast geared up for the ghosts
1 dead, 13 hurt in shooting at Kroger grocery store near Memphis: Police
“Will they kill me?” See Kristen Stewart as Princess Di in the final trailer for ‘Spencer’