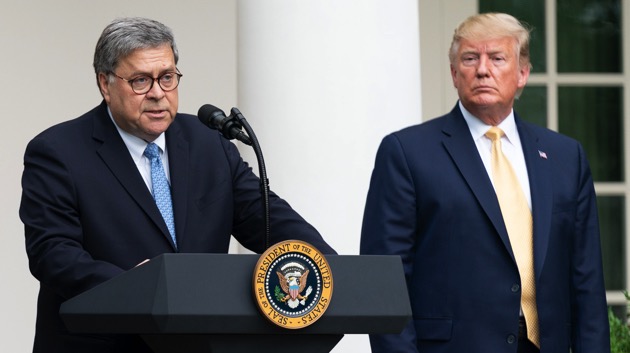 (WASHINGTON) — Attorney General William Barr has singled out New York City, Portland and Seattle as jurisdictions that he determined permit “violence and destruction of property” and should lose federal funding as a result, the Justice Department said Monday.

“We cannot allow federal tax dollars to be wasted when the safety of the citizenry hangs in the balance,” Barr said in a statement Monday announcing the targeted cities. “It is my hope that the cities identified by the Department of Justice today will reverse course and become serious about performing the basic function of government and start protecting their own citizens.”

Barr’s announcement follows up on a legally dubious memorandum issued by President Trump earlier this month, in which he demanded Barr and the Office of Management and Budget to identify cities and states whose leaders “7have contributed to the violence and destruction in their jurisdictions by failing to enforce the law, disempowering and significantly defunding their police departments, and refusing to accept offers of Federal law enforcement assistance.”

Democrats described president’s announcement as nakedly political and local leaders threatened to immediately sue the administration should it look to move forward with stripping federal funds.

The Justice Department is already engaged in court battles regarding the Trump administration’s ongoing effort to cut federal funding from so-called ‘sanctuary cities’ that have refused to share information with federal immigration authorities.

While the three cities identified by Barr indeed experienced a range of violence, rioting and looting in the months following George Floyd’s death at the hands of Minneapolis police in May, the unrest has largely abated in recent weeks even as Trump has increasingly sought to highlight images of violence and burning buildings to bolster his presidential campaign.

Barr has similarly made the issue one of his top priorities, leveling fiery attacks against local officials in the three cities while threatening direct intervention in cases where federal property or officials are endangered.

Last week, the Justice Department confirmed that officials researched the possibility of bringing criminal or civil rights charges against Portland city officials related to their response to growing unrest in the city throughout the summer.

The department has also encouraged U.S. attorneys around the country to consider charging rioters who carry out attacks against federal officials or property with sedition — attempted violent overthrow of the U.S. government.

In a memo last week, Deputy Attorney General Jeffrey Rosen said the rarely-used seditious conspiracy statute should be considered in instances, for instance, “where a group has conspired to take a federal courthouse or other federal property by force.”