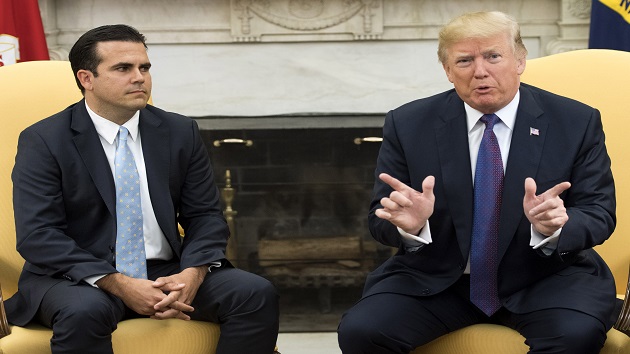 (NEW YORK) — As Puerto Rico marks the third anniversary of the devastation brought by Hurricane Maria on Sunday, both Joe Biden and President Donald Trump put the island — still dealing with the national crisis caused by the storm — at the forefront of the presidential campaign this week.

On Tuesday, the Biden campaign revealed a plan to help Puerto Rico recover from years of turmoil. The former vice president’s proposal sought to address some of the main issues the island has been facing in the last few years, including the reconstruction of infrastructure linked to the hurricane.

Meanwhile, the Trump administration announced Friday two of the largest grants ever from the Federal Emergency Management Administration will be awarded to “rebuild the island’s electric grid and spur recovery of the territory’s education system.” The grants of nearly $13 billion come as Puerto Ricans have been suffering for three years without safe homes or a stable electric system.

While the administration has touted the large influx of money allocated to the island’s recovery, little of it has been used. Puerto Rico has been approved to use only 16% of the $20.2 billion in Community Development Block Grant Disaster Recovery funds linked to Hurricane Maria due to restrictions from the Department of Housing and Urban Development and issues with the island’s unstable government, according to the Center for Investigative Journalism. From those, only 2% have been used.

Biden’s six-page plan says his administration will focus on providing the island with “the resources and technical assistance it needs not only to recover, but also to prosper.”

“It’s positive that Puerto Rico is a campaign topic, but I think it’s negative they have only addressed the easy solutions,” economist Jose Caraballo Cueto, an assistant professor at the University of Puerto Rico at Cayey, told ABC News about Biden’s proposal.

Caraballo Cueto said Biden’s proposal is a way to deal with short-term economic problems and not bigger issues involving the real progress and stability of the island.

“If we only focus on the reconstruction, the island’s economy will fall again,” said Caraballo Cueto.

Although experts and coalitions have called the plan progress when talking about addressing crucial issues in Puerto Rico, some wanted to see more long-term financial solutions. Top on that list is a repeal of the Jones Act, a topic not mentioned in Biden’s plan. The Jones Act mandates that goods transported between U.S. ports be done by ships built in the U.S. and manned by Americans. A 2019 study by Advantage Business Consulting found costs for Jones Act-compliant ships were 2.5 times more expensive than non-Jones Act ships.

“The issue of the Jones Act and the unfair burden it places on Puerto Rico’s consumers should have been included in this plan and it wasn’t,” read a statement from Power4PuertoRico, a group of leaders and organizations that advocates for Puerto Ricans in the wake of Maria.

Biden’s proposal also lacks a plan to push manufacturing development, a factor many consider to be key in the economic progress of the island, and one Trump has quickly seized on.

In the late 1970s, multiple U.S. companies started to establish manufacturing plants in the island. Under the Internal Revenue Code: Section 936, companies, mostly from the pharmaceutical industry, received tax exemptions. This turned Puerto Rico into a tax haven, experts say.

This led to an increase in jobs with competitive salaries. But it all vanished in 1996 when President Bill Clinton signed a law to phase out Section 936 in a 10-year period. Once the grace period ended, these companies left the island, causing major job losses.

“We (Puerto Rico) were intermediaries,” said Heriberto Martinez, president of the Puerto Rico Economists Association, explaining that while Puerto Ricans did benefit from the job creation under Section 936 it didn’t necessarily help the island’s core economy.

Beyond the economics, the island’s environment was also harmed. The Environmental Protection Agency fined several pharmaceutical companies for violating regulations, including the Clean Air Act, for alleged transgressions it said could increase air pollution in Puerto Rico.

Trump and economic adviser Peter Navarro have hammered Democrats for being responsible for driving manufacturing away from the island — without providing any evidence.

“We’re going to get [manufacturers] back into Puerto Rico; they like being there, but they changed the tax situation. They ripped it out,” Trump said at a press conference on Friday.

“We’re building it up as a great medical, pharmaceutical, manufacturing area where, you know, we are going to be taking back a lot of the business that we let go for years and we are going to bring it back,” Trump added.

He blamed Democrats for blocking funding for Puerto Rico and said — without providing specifics — that Biden “devastated the island of Puerto Rico,” and in a tweet on Friday said Obama “killed the pharmaceutical manufacturing business in Puerto Rico.”

The president has not discussed reinstating the tax exemption.

While incentives might help the island’s economy in a way, Martinez said, “There is a risk.”

“Local companies with local goods should be able to get those incentives as well,” said Martinez, who called this the key to making real economic progress.

During Friday’s press briefing, ABC News’ Jonathan Karl questioned Trump on why he announced the FEMA grants to Puerto Rico weeks before the election and not a year ago.

“We’ve been working on it for a long time to get it passed — very tough to get things passed,” responded Trump.

The congresswoman, who is Puerto Rican, also criticized the president’s timing on this announcement: “While I certainly hope to see this money put to good use making Puerto Rico’s electrical system more resilient, these delays are unacceptable, and it is insulting to Puerto Ricans everywhere that the Administration is so blatantly playing politics with this aid.”

The announcements by both presidential candidates, 44 days before the election, come as the campaigns make a push for the Latino vote in the important battleground state of Florida.

A study by the University of Florida’s Bureau of Economic and Business Research reported 30,000 to 50,000 Puerto Ricans migrated to Florida in the first year after Maria hit.

Florida has the largest concentration of Puerto Ricans in the mainland United States, according to the U.S. Census Bureau. In 2018, Puerto Ricans accounted for the 5.6% of the total population. The community represents 21.3% of the state’s Latino population.

Puerto Ricans do not have the ability to vote in the presidential election, unless they move to one of the 50 states, so both campaigns are focusing on this community as the race in Florida tightens.

‘Goliath’ star Billy Bob Thornton on taking the reins as director for the final season premiere
New ‘Ghostbusters: Afterlife’ posters show Paul Rudd and the new cast geared up for the ghosts
“Will they kill me?” See Kristen Stewart as Princess Di in the final trailer for ‘Spencer’
‘Tiger King 2’ and more: Netflix introduces itself as “The Home of True Crime”
The Case For Believing In Michigan Football
Patina Miller explains why she loves the “challenge” of playing Raquel in ‘Raising Kanan’