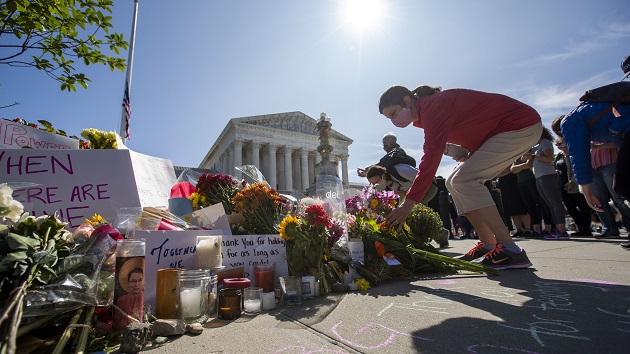 (WASHINGTON) — The news of Supreme Court Justice Ruth Bader Ginsburg’s death has brought Americans from across generations together in mourning.

In Washington, D.C., people assembled at the steps of the Supreme Court on Friday night and Saturday morning to honor the legendary justice, who died on Friday at age 87.

The sidewalk soon was covered with flowers, candles and handwritten notes.

One message in chalk said, “We love you RBG, thank you.”

Another message was Ginsburg’s own words: “Real change, enduring change happens one step at a time.”

As the sun rose above the highest court in the land, dozens showed up to the steps of the Supreme Court to honor Ruth Bader Ginsburg #RIPRBG pic.twitter.com/fxtjl6bFiA

At Columbia University in New York City, mourners placed legal pads and flowers in honor of Ginsburg, who graduated from Columbia Law School at the top of her class in 1959.

In New Hampshire, people congregated at the state house Saturday to pay their respects.

Inspiring to see Granite Staters come together to pay tribute to the life and legacy of Ruth Bader Ginsburg at the State House this morning. Thanks to @cindewarmington and @LPS_KentStreet for helping organize this memorial, and for honoring her memory with action. #RBG pic.twitter.com/Dd1PnDNuKM

It’s On Us, a group that fights against college sexual assault, is calling for a nationwide memorial at courthouses across the country Saturday night.

8pm local time tonight | “May her memory be a revolution.”

Those with Columbia Law School’s Center for Contemporary Critical Thought will be participating in a national memorial at the Triumph of the Human Spirit Statue in Manhattan Saturday night.

Join us today at the National memorial for RBG at the Triumph of the Human Spirit Statue. We will meet at 7:45 pm at the Chambers street 1,2,3 Subway Exit and walk together to the memorial. More information can be found here: https://t.co/8fdnAbAYMC pic.twitter.com/YDug5vvhD8