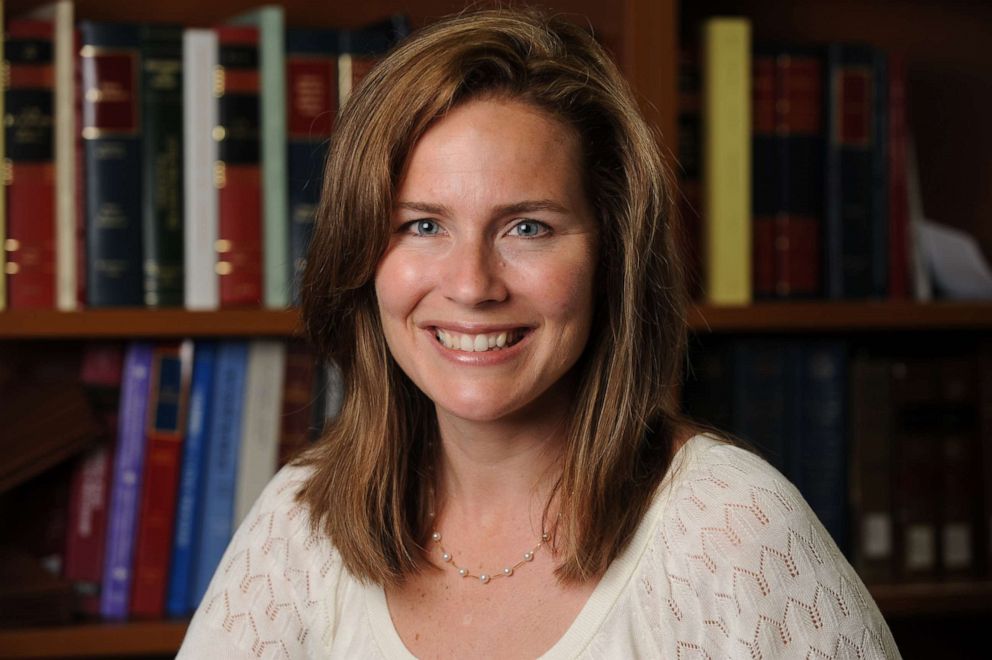 Courtesy of the University of Notre Dame
Posted on September 19, 2020 by ABC News

(WASHINGTON) — A conservative female federal judge appears to be the lead contender on President Donald Trump’s list of potential nominees to fill the seat of the late Justice Ruth Bader Ginsburg, multiple sources familiar with the thinking of the president and his advisers told ABC News.

Trump is expected to put forth a nominee in the coming days, and while it is still early in the process, U.S. Circuit Judge Amy Coney Barrett is seen as a leading contender, several sources told ABC News. Barrett was one of four finalists in Trump’s search for Justice Anthony M. Kennedy’s replacement in 2018.

Barrett joins three other federal judges on the shortlist of potential picks, according to ABC News’ sources. Here’s a quick look at the four potential nominees:

Barrett, 48, was confirmed in October 2017 to the 7th U.S. Circuit Court of Appeals in Chicago. She is a former Notre Dame law professor who had clerked for the late Justice Antonin Scalia.

Lagoa, 52, was appointed to the 11th Circuit in Atlanta last year and previously served on the Florida Supreme Court. She has also served as district judge on the Florida 3rd District Court of Appeal and as an assistant U.S. attorney for the Southern District of Florida.

Rushing, 38, was appointed to the 4th Circuit in Virginia last year and was previously a partner at Williams & Connolly. She has clerked for Justice Clarence Thomas.

Thapar, 51, was a federal judge in Kentucky before Trump nominated him to the 6th Circuit in May 2017. He would be the first Asian American Justice if appointed.

Other potential nominees, based on ABC News reporting, include Judge Joan Larsen, 51, who was confirmed to the 6th Circuit in Cincinnati in October 2017 and previously served on the Michigan Supreme Court, and Judge Thomas Hardiman, 55, of the 3rd Circuit at Philadelphia, who was a top contender for the first two vacancies under President Trump.