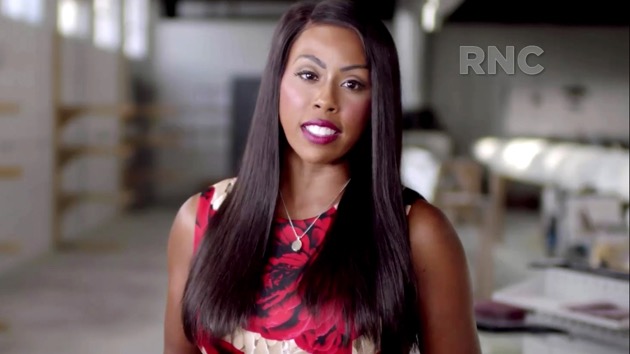 Photo Courtesy of the Committee on Arrangements for the 2020 Republican National Committee via Getty Images
Posted on September 18, 2020 by ABC News

(NEW YORK) — Kim Klacik, who is vying to represent Maryland’s 7th Congressional District, told The View on Friday that she finds President Donald Trump’s leadership to be “the opposite of racism.”

She drew national attention after posting a fiery general election campaign ad, which was retweeted by the president. Trump later endorsed her, and she spoke in a video featured at the Republican National Convention in August.

Klacik, a Republican, is running against former NAACP President Kweisi Mfume, who is now representing the seat for a second time after the death of Rep. Elijah Cummings last year. Klacik and Mfume ran against each other during the special election to fill the 7th district seat, and Mfume won handily with 73.8% of the vote.

“Elijah Cummings did a lot for the city and the residents, but for the last 20 years, you’ve seen the city deteriorate. He was sick in the end, and we have to get somebody in there ready to roll up their sleeves and get the work done,” Klacik said. “I would never speak badly about Congressman Cummings. On the internet, I have pictures with him. At the same time though, we’ve got to get the work done.”

One of the cornerstones of her pitch to voters is that the Democratic party has taken Black voters across the country for granted, especially in Baltimore.

“If he cared about the black community, why hasn’t he done anything for all that time?” she asked of former vice president and current Democratic nominee Joe Biden.

“President Trump, like I said earlier, has done many things with only three-and-a-half years, so to me, it doesn’t even jive. I believe liberals do put us in a box, and that’s why they’re always talking about different communities and the way they do it is actually divisive,” she said.

Klacik said throughout her campaign that while she believes that Black lives matter, she is not a supporter of the movement — or the violence in some of the protests across the country, which ensued over interactions with Black Americans and law enforcement.

“I don’t know what their list of demands are. They say they want to defund the police, and take a look at that. It doesn’t make any sense. If you want police to have more training and be better equipped for their job, you would add funding. Do I believe there are right-wing instigators? Yeah. There are instigators from all types of groups. You can’t say Democrat or Republican. It’s on both sides for sure,” she said.

Mfume, her opponent in the race, told the Baltimore Sun that Klacik’s message to Republican voters in the heavily blue district was “about 50 years too late.”

“Donald Trump and his party don’t give a damn about inner cities, which is why they never win there. People can see what’s going on,” he told the paper Monday.