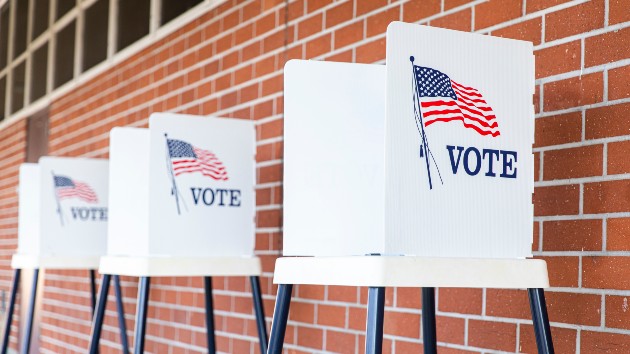 (WASHINGTON) — President Donald Trump and former Vice President Joe Biden are heading to Minnesota on Friday, as the Midwestern state becomes among the first to begin early in-person voting in the 2020 general election.

It has been nearly half a century since Minnesota voted for a Republican presidential candidate, but it is seen as a potential swing state following Trump’s narrow loss in 2016 to Democratic presidential nominee Hillary Clinton.

Amid the coronavirus pandemic, the North Star State has also been at the forefront of the national debate on race and racism in America following the death of George Floyd in Minneapolis in May, which sparked a massive civil rights movement in the U.S.

Trump is set to hold an event in Bemidji in Beltrami County, which is split between the 7th and 8th congressional districts. Trump won the county in 2016, with 50.6% of the vote. The 7th Congressional District had historically voted Democrat in the past, but in 2016 Trump carried the district by a 15-point margin.

Meanwhile, Biden will host an event in Duluth in the 8th Congressional District at a union training center. Duluth, which casts almost a quarter of the rural north’s total vote, swung for the Democratic ticket by 37 points in 2012 and by 29 points in 2016.

Ahead of Biden and Trump’s visits, Gov. Tim Walz urged both campaigns to comply with Minnesota’s COVID-19 safety guidelines.

Trump has consistently cast himself as the “law and order” president; however, his campaign has consistently flouted health guidelines amid the pandemic, holding large rallies across the country where thousands gathered in close quarters, often without masks.

Why Trump is in a ‘jam’ in Minnesota

Minnesota is increasingly seen as a potential swing state in the presidential election, given Trump’s near victory against Clinton in 2016. Trump lost the Midwestern state’s 10 electoral votes by a slim margin to the former secretary of state, who won by about 44,500 votes or 1.5%.

The president has repeatedly voiced his conviction that he would have flipped the state in 2016 if he had made one more appearance prior to the election.

“One more speech, I would have won,” Trump told his supporters during a campaign event on Aug. 17, at the Mankato Regional Airport.

Since the last presidential election, there has been an uptick in Republican support. Two House seats, in the 1st and 8th congressional districts, previously held by Democrats, flipped in 2018.

But according to a new ABC News/Washington Post poll released Wednesday, women, suburban residents and independents are among the groups lifting Biden to a substantial lead in Minnesota, where he holds a clear advantage, 57% to 41%.

Political scientist Larry Jacobs, the founder of the Center for the Study of Politics and Governance at the University of Minnesota, told ABC News that “deep disapproval” in the president’s handling of the pandemic is central to why he is in a “jam” in Minnesota.

“I think it’s a sense that the country is in the wrong direction. I think he’s continued to deeply offend women and so there’s a tremendous gender gap,” he said, adding that “the problems you’ve seen in other states, they exist in Minnesota. The president is losing among women and the coronavirus is hurting him.”

The new ABC News poll results show that views on the economy and the coronavirus pandemic are defining the 2020 race.

Biden leads Trump by 22 points in trust to handle the coronavirus, as well as 24 points on equal treatment of racial groups, 17 points on handling health care, 14 points on discouraging violence at political protests and 11 points on crime and safety. But when it comes to who can best handle the economy, it is a dead heat.

Why ‘turnout’ is key for Biden

For decades, Minnesota has had an unbroken Democratic streak, voting for Democratic presidential candidates as far back as Jimmy Carter in 1976. Since 1932, it has voted Republican only once — for Richard Nixon in 1972. But according to Jacobs, dynamics in the state have shifted in recent decades and this is reflected in the 2020 landscape.

Describing the state as “polka-dotted,” Jacobs said that rural areas are red, urban areas are blue and the suburbs are purple.

Democratic support grows the closer you get to the more highly populated “urban core” — the Twin Cities of St. Paul and Minneapolis, where Trump “has large deficits,” Jacobs explained. Meanwhile, Trump’s support is “coming from mostly rural areas,” he added, “particularly the northern part of the state, which was once a Democratic stronghold,” as well as southern Minnesota.

The rural north, known as the Iron Range, was an industrial base known for mining and the production of iron ore and there, Democrats like Hubert Humphrey and Walter Mondale were victorious, but that has since “collapsed” and become a Republican stronghold, Jacobs said.

In a campaign press release on Wednesday, Biden staked claim to the Iron Range, saying he was proud to be endorsed by labor, including the United Steelworkers, who backed him after six Iron Range mayors pledged their support for Trump in August.

“I think one of the big issues is going to be turnout in Minneapolis and St. Paul. It there’s a large turnout, that’s going to be good news for Democrats,” Jacobs said. “If there’s a huge turnout in Minneapolis and St. Paul, Trump’s gonna have a very difficult time, and I think the suburbs will probably signal where the state’s gonna go If it’s closer.”

According to the new ABC News poll, Biden has a 16-point lead in the Minnesota suburbs, a 21-point lead with independents and a vast lead with women, leading Trump 67% to 31% in the state and with a 40-point lead among suburban women.

Trump pitches ‘law and order’ as Biden leads in trust

Streets throughout the U.S. have been rocked by protests in response to the police killings of unarmed Black men and women across the country — an issue that has become central to both the Trump and Biden campaigns.

And in Minnesota, where Floyd was killed, the energy is high and tensions are palpable.

Leslie Redmond, president of the NAACP’s Minneapolis chapter, told ABC News that even before the coronavirus plagued the nation, Black people in Minnesota “were already in a state of emergency,” facing “some of the worst racial disparities” economically and socially.

“COVID-19 really shut the world down and George Floyd and his murder really kind of opened the world back up,” Redmond said. “Before George Floyd was murdered, people weren’t even really coming outside like that, and then you have people willing to risk their own health to protest in the state. The thing that’s really killing us is white supremacy. And I think that that’s really powerful. And I think that that has ignited a number of people, and I’m hoping that the protests can lead over to the voting as well.”

According to the latest ABC News/Washington Post poll, views on the protests and the president’s response are also impacting the choices of voters.

Non-whites make up small shares of likely voters in Minnesota, at 13%, and about two-thirds support Biden.

The president, who is casting himself as a “law and order” candidate, has blasted the protests and repeatedly criticized the leadership of Democratic officials, including Walz, blaming them for the ongoing violence, looting and riots that have erupted amid the unrest.

Last month, Trump held an event in Manakota, where he spoke to a crowd of supporters, and voiced his support for the local police department and those impacted by some of the destruction of local businesses that ensued following the protests.

Biden has criticized the violence but has been steadfast in his support for protesters. He also met with Floyd’s family in June ahead of the funeral in Minneapolis and vowed to focus on police reform and battling systemic racism if elected.

People who back recent protests over police treatment of Black people back Biden by 86% to 12% in Minnesota, while about three-quarters of those who opposed them support Trump. Meanwhile, registered voters support such protests by 55% to 40% in Minnesota and trust Biden over Trump to handle equal treatment of racial groups by 24 points and Biden in handling crime and safety by 11 points over Trump.

Minnesotans will be among the first Americans to cast their ballots at a voting booth this fall, when they head to the polls on Friday for the state’s first day of in-person voting.

Meanwhile, mail-in voting is becoming an increasingly popular option for those hoping to avoid gatherings amid the pandemic. As of Sept. 11, 863,052 absentee ballots for the November general election had already been requested.

In last month’s primary, six in 10 voters in the state voted by absentee ballot. In past elections, the number of absentee voters has hovered around 24%.

In order to make it easier for voters to cast their ballots by mail, Minnesota agreed to drop the witness requirement from its mail-in voting process for both the 2020 primary and the general elections.

Minnesota often leads the nation in voter turnout, and by beginning the early voting process on Sept.18, the state law is giving Minnesotans 46 days to cast their votes.

Grace Wachlarowicz, assistant city clerk and director of Elections & Voter Services in Minneapolis, told ABC News that 114,891 mail ballots will be sent out to voters on Friday.

The state has also implemented a number of safety measures, which Wachlarowicz says will be followed “stringently,” including sanitization, appropriate spaces, and curbside voters for voters who choose to cast their ballots in-person. Additionally, the governor’s July 25 executive order requires that masks be worn in public places, including polling places, though no voter will be denied the right to vote if he or she refuses to wear a mask.

Election 2020 live updates: Obama joins Biden on the trail, Trump in Pennsylvania
Republicans prepare for post-Election Day legal fights in battleground states
Officer involved in Breonna Taylor shooting sues Taylor’s boyfriend, Kenneth Walker
US produced more plastic waste in 1 year than any other country on Earth: Study
Halloween inspo: Mindy Kaling dresses up as Devi from her show ‘Never Have I Ever’
Omari Hardwick and Loretta Devine agree that laughter was their best medicine in their new horror film ‘Spell’