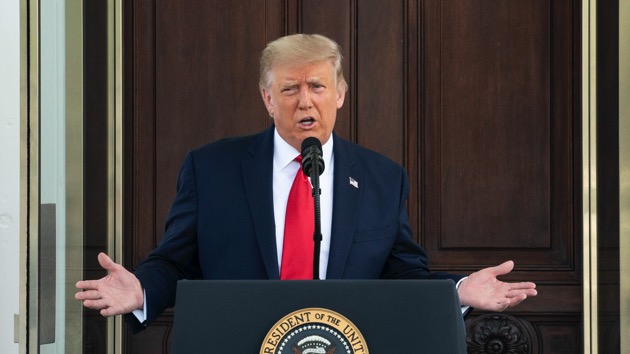 (WASHINGTON) — President Donald Trump is facing backlash after blaming blue states for the coronavirus death toll during a press briefing at the White House on Wednesday.

“So we’re down in this territory,” Trump said, pointing to a graph that the White House first unveiled in the spring which showed two estimated ranges of possible death tolls depending on efforts to slow the spread of the virus. “And that’s despite the fact that the blue states had had tremendous death rates. If you take the blue states out, we’re at a level that I don’t think anybody in the world would be at. We’re really at a very low level. But some of the states, they were blue states and blue state-managed.”

New York, California, and New Jersey – all lead by Democrats– were among the states with highest number of deaths from coronavirus. However, both Texas and Florida, which are Republican led, are also in the top five states in terms of coronavirus deaths, according to Johns Hopkins University. These five states also have the largest populations in the country and were the first to tackle major outbreaks of the virus, suggesting that there is no scientific coloration between political party of state leaders and the spread of the virus.

“Trump continues to politicize the coronavirus,” the Democratic National Committee tweeted shortly after the briefing. “COVID isn’t a red state or blue state issue. 9 of the 10 states with the most infections per capita have Republican governors. This virus has impacted all Americans.”

New York Sen. Chuck Schumer gave a scathing rebuke of Trump on the Senate floor Thursday morning, asking twice during his remarks “what kind of a demented person” would say that American lives lost in certain states don’t count.

“Yes, Mr. President, if you don’t count the total number of Americans who have died you might think it’s not so bad,” Schumer said. “If you close your eyes and pretend that half of the country doesn’t exist some might think you didn’t do such a spectacularly awful job.”

Trump has long blamed and blasted Democratic governors for their handling of the pandemic, even accusing them of exploiting the pandemic for political reasons. But yesterday was the furthest the president has gone in politicizing the pandemic which has claimed the lives of nearly 200,000 Americans.