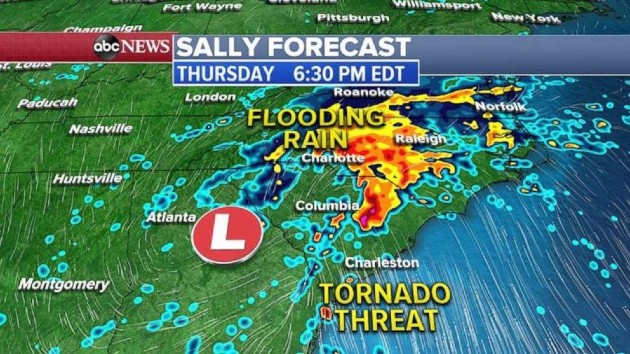 (NEW YORK) — Sally is now a tropical depression and is expected to become a remnant low as it moves from Alabama into Georgia and the Carolinas.

As Sally remnants move east Thursday afternoon and evening, there is a threat for flooding rain from Atlanta to Charlotte and Raleigh, North Carolina. There is also a threat for tornadoes from central Georgia into Charleston, South Carolina, and into Wilmington and eastern North Carolina.

Tornadoes will be possible for eastern North Carolina.

As Sally departs the Gulf Coast, a new tropical system is trying to develop in the southern Gulf. The National Hurricane Center gives this storm a 90% chance of becoming a tropical depression or Tropical Storm Wilfred.

This next tropical system is expected to meander in the Gulf of Mexico for the next week or so, and then some of the long-term models are showing it coming north towards the Gulf Coast by the middle to end of next week, anywhere from Texas to Louisiana.

Besides the new tropical threat in the Gulf, Hurricane Teddy is strengthening and heading close to Bermuda by early next week. Teddy is expected to become a major hurricane by Thursday night.

Sally made landfall at 5:45 a.m. ET Wednesday, as a Category 2 storm with winds of 105 mph. This was the first hurricane to make landfall in Alabama since Ivan in 2004.

The highest storm surge was in Pensacola, Florida, where Gulf water rose 5.6 feet. This was the third-highest surge in the city’s history.

An estimated 30 inches of rain fell just north of Pensacola.

The highest wind gust reported on land was 99 mph in Dauphin Island, Alabama.