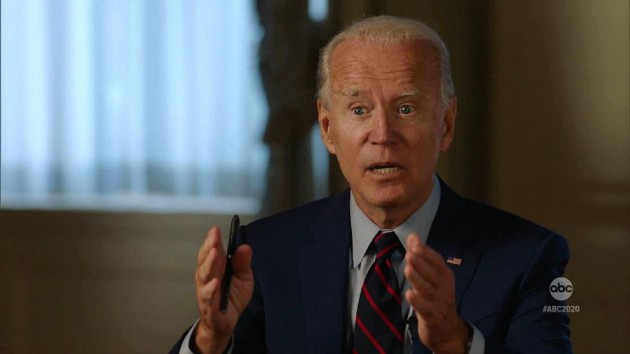 (WASHINGTON) — Former Vice President Joe Biden’s campaign unveiled two new television ads on Thursday, including one that features a testimonial from a farmer from western Pennsylvania who voted for Donald Trump in 2016 but now calls that choice a “mistake” he won’t make again.

“I voted for Trump in ’16, and I’ll be the first to tell you I made a mistake,” Rick, a voter and third-generation farmer from Lawrence County, Pennsylvania, said in one of the new ads entitled “Totally Negligent,” that the Biden campaign is rolling out. The ad will run in the battleground states of Michigan, North Carolina, Ohio, Wisconsin, Minnesota and, of course, the Keystone State, according to the Biden campaign.

Echoing Biden’s language on the COVID-19 crisis, Rick does not pin the existence of the virus on Trump, but says the outsized toll the coronavirus pandemic has taken on the United States is due to the President’s mismanagement of the situation.

“The pandemic, it’s been tough on everybody,” Rick continues. “President Trump, he’s not responsible for this virus, nobody was going to be able to stop that. But he was totally negligent on how he informed the people …The guy gets the blame for what’s happening.”

Areas like western Pennsylvania, where Democrats were able to flip a congressional seat in a 2018 special election, are key to Biden’s hopes of winning the White House, and include many of the voters that strayed from the party in 2016 and helped deliver Trump the presidency.

Both Biden and Trump have visited the area earlier this month, the former vice president giving a speech at a research facility in Pittsburgh while the president opted for a rally at an airplane hangar in Latrobe, roughly 50 miles west of the Steel City.

The second new ad, “Engine,” features footage from Biden’s July speech in Dunmore, Pennsylvania, just outside of the former vice president’s hometown of Scranton, where he announced the first plank of his “Build Back Better” economic agenda that emphasized revitalizing American manufacturing by incentivizing companies to make and purchase goods in the United States.

“I do not buy for one second, that the vitality of American manufacturing is a thing of the past. It has to be part of the engine of new prosperity in America now. And it starts with a pretty basic idea: when we spend taxpayers’ money, we should use it to buy American products and support American jobs,” Biden said in the clip included in the ad, which will air in the swing states of Michigan, North Carolina, Ohio, Wisconsin and Pennsylvania.

The new ads from Biden also come as the fall campaign has begun in earnest, with both campaigns aggressively targeting voters in swing states and the former vice president resuming in-person campaigning after running an almost entirely virtual campaign while the coronavirus pandemic ravaged the country.

Since the beginning of September, both Biden and Trump have crisscrossed a series of states that will decide November’s election, a back and forth that will continue through the latter part of this week. Biden has continued to hold socially distanced events with limited participation, while Trump’s campaign has largely flouted local guidelines that limited large gatherings, holding indoor events akin to rallies in Nevada and Arizona in recent days.

Biden is participating in a town hall hosted by CNN Thursday in Scranton, Pennsylvania, while Trump is holding a campaign event in Mosinee, Wisconsin.

Biden is traveling Friday to Minnesota, where a new poll conducted this week by ABC News and the Washington Post has him leading Trump by a healthy 16-point margin among likely voters. The Democratic nominee is visiting the northern town of Duluth to tour a union training center and deliver a speech, according to his campaign.

Trump will also be in Minnesota on Friday, hosting a campaign event in Bemidji, Minnesota.

Presidential debate live updates: Pleixglass barriers removed from stage
Biden, under pressure on ‘court packing,’ says he would convene commission on reform
Plexiglass partitions to separate Trump, Biden as they face off in final 2020 debate
Biden says he would convene bipartisan commission on court reform if elected
New wildfire in Colorado prompts mandatory evacuations
Jennifer Lawrence admits she “was a little Republican” until Trump became president