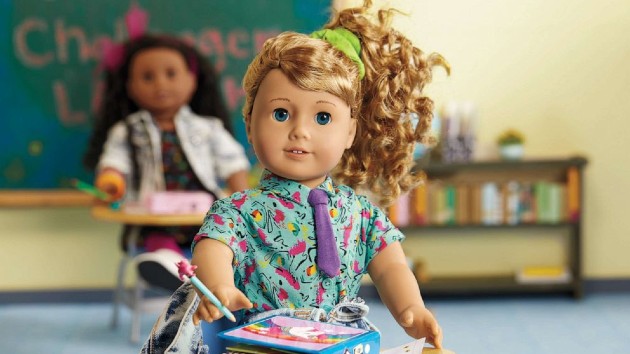 (NEW YORK) — American Girl is giving everyone a chance to channel the spirit of ’80s style with the brand’s latest doll launch.

For the first time in the past three years, the toy company unveiled a new historical doll, “Courtney Moore,” on Tuesday.

The brand’s latest doll grew up in 1986 and her personality and look are inspired by the era’s pop culture, hairstyles, bright-colored fashion, music and more.

​”The ’80s are back, and we’re thrilled to celebrate this pop culture-defining decade with girls and their parents through Courtney,” said Jamie Cygielman, general manager of American Girl, in a statement.

“For nearly 35 years, American Girl’s historical characters have helped to bridge the past and present, while providing inspiring role models through immersive storytelling and imaginative play … Likewise, Courtney’s story illustrates how to create positive change by standing up to fear, finding strength in every challenge, and developing empathy for others — qualities that are timeless and more important than ever,” the statement read.

The Courtney doll, which retails for $110, is available as an 18-inch doll with curly sandy-blonde hair that’s styled in a high side ponytail with lots of accessories. She’s also wearing a high-waisted denim skirt, a blue crop top and slouchy faux-leather boots.

There are 13 additional pieces included with the collection to allow girls to style her with a variety of unique looks.

A two-book series written by Kellen Hertz brings Courtney’s background to life. Readers learn that Courtney is an avid gamer who grew up in a blended family in Orange Valley, California.

She loves to go to the arcade to play games such as PAC-MAN, and has a desire to create her own video game that attracts more girls to gaming. When given the chance to do so, she is inspired by women in leadership such as her mother to invent a bold, brave super hero.

To continue the brand’s mission to help build girls of strong character and confidence, American Girl is also partnering with Girls Who Code with efforts to influence female leadership within computer science and technology fields.

From now through Dec. 31, the brand is matching customer donations, dollar for dollar up to a maximum of $50,000, to support the organization’s programming and outreach to girls, including those from historically underrepresented groups.

American Girl is also providing a $5,000 scholarship to four Girls Who Code members to help further their education in computer science or a related field.

“Girls are constantly online, using apps, playing games and more, that’s why it’s so important that they also see themselves on the other side of those products, actually building them,” said Reshma Saujani, CEO of Girls Who Code, in a statement. “It’s our goal to show girls the power of learning this skill set so that they can code the future they want to live in and, ultimately, change the world.”