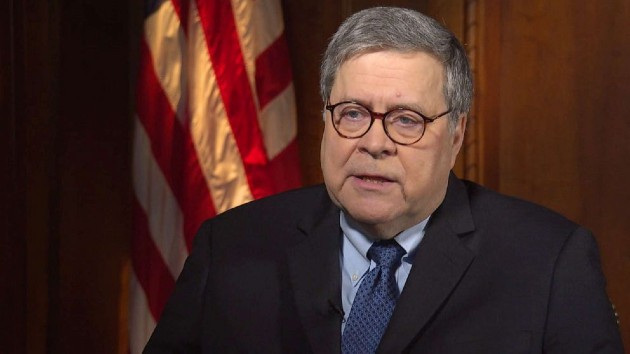 “Even the most well-meaning people can do great damage if they lose perspective,” Barr said. “The road to hell is paved with good intentions, as they say. Individual prosecutors can sometimes become headhunters, consumed with taking down their target.”

Barr suggested that, prior to his leadership, the Department of Justice was run similar to a preschool by allowing line prosecutors to make decisions separate from an approval process designated by politically confirmed appointees.

Barr’s remarks come as he has repeatedly faced pushback within the department from federal career prosecutors involved in cases related to allies of President Donald Trump, such as self-proclaimed “dirty trickster” Roger Stone and Trump’s former national security adviser Michael Flynn. Career prosecutors resigned from both cases after what they believed were Barr’s improper interventions in matters of direct political interest to Trump.

And just last week, a top prosecutor for U.S. attorney John Durham, assisting him in his probe of the Russia investigation, resigned from the DOJ. The Hartford Courant reported the resignation was related to pressure from Barr to produce an interim report prior to the November presidential election.

In his remarks, Barr clearly sought to reassert his authority over career officials — repeatedly taking shots at what he suggested were politically rogue agents acting against the interests of the true leader of the nation’s top law enforcement agency, himself.

Barr recounted what he described as his own meetings with FBI agents where he posed them the question, “Whose agents do you think you are?”

The remarks amount to the sharpest public rebuke in recent memory by an attorney general aimed at officials employed by his own department, tasked with the often-grueling daily work of enforcing federal law around the nation.

“Line prosecutors … are generally part of the permanent bureaucracy,” Barr said. “They do not have the political legitimacy to be the public face of tough decisions and they lack the political buy-in necessary to publicly defend those decisions.”

“The attorney general, senior DOJ officials and U.S. attorneys are indeed political, but they are political in a good and necessary sense,” Barr added.

Barr argued that the DOJ in recent years “has sometimes acted more like a trade association for federal prosecutors than the administrator of a fair system of justice based on clear and sensible legal rules.”

The statement appears to be an echo of his arguments in the wake of his extraordinary decision to drop charges against Flynn, who he has cast as a victim of overzealous prosecutors from former special counsel Robert Mueller’s office.

“In case after case, we have advanced and defended hyper-aggressive extensions of the criminal law. This is wrong and we must stop doing it,” Barr said. “We should want a fair system with clear rules that the people can understand. It does not serve the ends of justice to advocate for fuzzy and manipulable criminal prohibitions that maximize our options as prosecutors. Preventing that sort of pro-prosecutor uncertainty is what the ancient rule of lenity is all about.”

The remarks also mark a continuance of Barr’s recent unapologetic tour where he has freely expressed openly partisan positions while accusing his opponents of being responsible for tearing down the norms in U.S. society. All the while, he has spent much of the time defending his own extraordinary and sometimes unprecedented actions intervening in department matters of direct political interest to Trump.

At one point, Barr even took an underhanded and unprompted shot at Mueller’s prosecutors in a portion of his remarks where he argued that because the Obama administration lost more cases before the Supreme Court than the Trump administration, accusations by Democrats that Trump officials are acting “lawlessly” are completely unfounded.

“Again, the Obama administration, you know had some of the people in Mueller’s office writing their briefs for the Supreme Court so maybe that explains something,” Barr said. “You know, they’re not crowing so much after they got whooped in the Supreme Court.”

In a question and answer session following his remarks, Barr also argued that governors who have continued limiting movement and gatherings in their states due to the COVID-19 pandemic run the risk of infringing on their citizens’ constitutionally protected liberties. Barr made the extraordinary argument that the idea of “putting a national lockdown” and “stay at home” orders was — “other than slavery” — “the greatest intrusion on civil liberties in American history.”