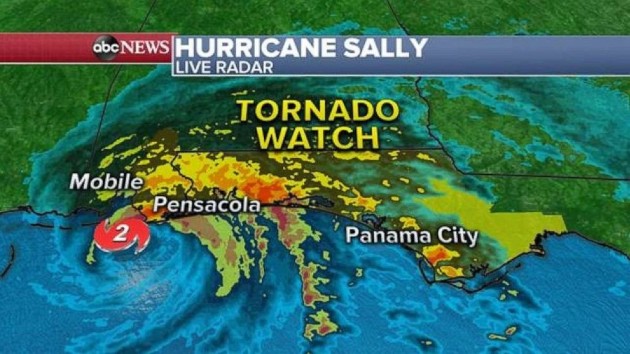 (NEW YORK) — Hurricane Sally made landfall near Gulf Shores, Alabama, just before 6 a.m. ET Wednesday as a dangerous Category 2 storm, and is now bringing life-threatening flooding to the Gulf Coast.

Some areas have already received up to 25 inches of rain, which the National Weather Service said could be doubled given how quickly the rain has fallen in a short period of time.

Sally, now weakened to a Category 1, is crawling north-northwest at 3 mph. Even though Sally is weakening in terms of wind speed, the torrential rainfall is extremely dangerous.

The rain is falling at 4 inches per hour in parts of Alabama and Florida.

Major flooding has been reported in Baldwin County, Alabama.

“If you are on high ground above flooded areas, being prepared to stay where you are,” county emergency management officials said.

Parts of Florida’s Okaloosa and Santa Rosa counties are under a flash flood emergency alert through the morning.

“These warnings are issued for exceedingly rare situations when a severe threat to human life and catastrophic damage from a flash flood is happening,” the National Weather Service said Wednesday morning. “This is a life-threatening situation. Seek higher ground now.”

Pensacola, Florida, is facing storm surge, wind gusts up to 92 mph, and a downtown submerged under at least 3 to 4 feet of water.

“Flooded roadways and intersections, along with hazardous debris in roadways (locations), have become too numerous to list,” the Pensacola Police Department said. “Please stay off the roadways now.”

The slow-moving storm has already forced some local first responders to stay indoors. The Orange Beach Police Department in Alabama said it could no longer respond to calls.

“Present conditions are preventing us from answering calls at this time. Please take all measures to be as safe as possible,” the department tweeted. “If you have the option to move to higher ground do so now.”

Hurricane Sally’s latest path shows the storm tracking northeast. After Wednesday, remnants of Sally will continue to inch inland toward Atlanta, where up to a foot of rain is possible.

Heavy rain will even spread into South Carolina, North Carolina and southern Virginia, where some areas could see up to a half a foot of rain. Flash flooding is expected there Friday.

This storm has also resulted in several tornado warnings, though no tornadoes have been confirmed yet. A tornado watch was issued for parts of Florida, Georgia and Alabama until 7 p.m. ET.