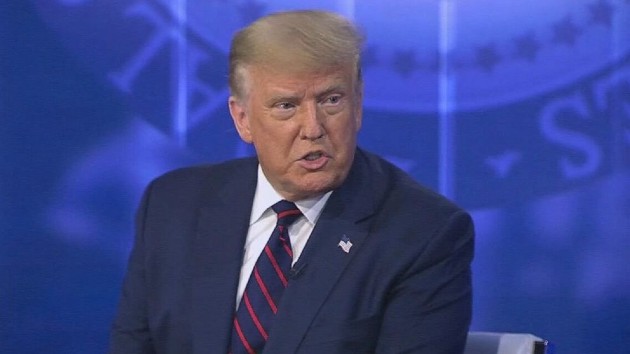 (PHILADELPHIA) — There are less than 60 days until many voters head to the polls to cast ballots for President Donald Trump or former Vice President Joe Biden — but some voters are still not committed to either candidate.

In an ABC News town hall Tuesday, the president faced questions from some of those voters living in a critical battleground state: Pennsylvania.

The socially-distanced event was moderated by ABC News’ chief anchor, George Stephanopoulos, at the National Constitution Center in Philadelphia — a different setting than the president (who usually answers questions from the White House press corps and his favorite anchors at Fox News) is used to.

[ CLICK HERE TO READ THE FULL TRANSCRIPT FROM THE TOWN HALL ]

In 2016, the Keystone State went for Trump by just 44,292 votes — less than one percentage point of the total vote. And while a recent poll of likely voters in the state showed that Biden is now leading by nine points, a lot can change in the final weeks of an election, and opportunities for the candidates to answer directly to voters — like the town hall and the upcoming presidential debates — could be what swing voters need to choose a candidate, or to sit out the election altogether.

Here are five key takeaways from the 90-minute special event:

Trump says COVID-19 has been presidency’s biggest challenge, but nothing more could have been done

“Could you have done more to stop it?” Stephanopoulos asked Trump for the last question of the town hall.

“I don’t think so,” the president responded.

Trump has held the highest office as over 195,000 Americans have died from coronavirus. Under his leadership, the U.S. has seen more deaths from the virus than any other country in the world.

And while he acknowledged that coronavirus has been the biggest challenge of his presidency — before it, “things were going so well,” he told the audience — Trump projected confidence about the decisions he’s made so far.

During the town hall, the president disputed that he had downplayed the virus. But, following his denial, he continued to do just that.

“We’re going to be okay and it is going away,” even “without the vaccine,” he told the audience.

Medical experts, meanwhile, say there is no evidence that the virus will go away without a vaccine.

“Sure, over a period of time. Sure with time it goes away,” Trump said.

Each day, cases continue to rise at a rate that Anthony Fauci, the nation’s top infectious disease expert, said puts the U.S. in a concerning position heading into fall.

“I think what I did by closing up the country, I think I saved two, maybe two and a half [million], maybe more than that, lives. I really don’t think so. I think we did a very good job. I don’t know if that’s been recognized,” Trump said.

The first three questions of the night were about the president’s response to the coronavirus pandemic, and in response to each of them, the president essentially invalidated the premise of the voters’ questions.

“I thought you were doing a good job with the pandemic response until about May 1st, then you took your foot off the gas pedal,” said Paul Tubiana, a diabetic and conservative Republican who voted for Trump in 2016. “Why did you throw vulnerable people like me under the bus?”

Tubiana also said that because of his underlying medical condition, he has to “dodge people” who won’t practice social distancing or wear face masks — something the president has only done on select occasions.

The next questioner, Julie Bart, asked the president why he doesn’t wear a mask more often, noting that the science indicates masks help stop the spread of the virus.

“Well, I do wear them when I have to and when I’m in hospitals and other locations,” Trump responded.

The next questioner, Ajani Powell, then asked Trump why he would “downplay” the pandemic.

“Yeah, well, I didn’t downplay it. I, actually, in many ways, I up-played it, in terms of action,” Trump replied, even though in a recording from an interview with journalist Bob Woodward on March 19, Trump said, “I wanted to always play it down… I still like playing it down, because I don’t want to create a panic.”

Carl Day, an African American pastor in Philadelphia, pressed Trump on his promise to “make America great again,” asking the president, “When has America been great for African Americans in the ghetto of America? Are you aware of how tone deaf, that comes off to African American community?”

But, Trump evaded the question altogether.

“Well, I can say this: We have tremendous African American support,” he said, before going on to talk about how Black Americans were doing before the pandemic hit, claiming that six or seven months ago “was the best single moment in the history of the African American people in this country.”

Trump continues to focus on law and order, even when asked about racial injustice

Sparked by Black Americans being killed or shot by police, protests against racial injustice across the country have at times devolved into violent riots and looting. Amid that unrest, the president and his reelection campaign have focused their messaging on promoting law and order, rather than on seeking to understand the actions that have led to the violence.

During Tuesday’s town hall, Trump again pivoted to that messaging.

Laura Galvas, a registered nurse from the suburbs of Pittsburgh, asked the president if, in light of these protests, he feels there is racial injustice in the United States, and if he does, what can be done to address it.

Trump initially called the police shootings of George Floyd, Breonna Taylor and Jacob Blake “tragic events,” but quickly turned to police, asserting that some of them “choke (and) make mistakes,” and indicated the real problem is that police are no longer respected.

“I will say this: If you’re going to stop crime, we have to give… the respect back to the police that they deserve,” he said. “We have to give them their mojo. We have to let them protect us.”

He was later asked by Alexander Floyd, a supporter of his in 2016, how to balance police reform — something protesters have been demanding — “without sacrificing public safety.”

After talking about a police reform bill from Republican Sen. Tim Scott that didn’t have enough votes to pass, Trump again hailed police officers, and said that the current climate is especially hard for them.

“Police are so afraid today that they do something slightly wrong, slightly wrong and their pensions gone, their jobs gone, who knows what happens. Their life is ruined, their wife or their husband will leave, the whole thing, it’s a very scary thing,” Trump said.

But while Trump told an earlier questioner that he “hopes there’s not a race problem” in America, the president didn’t acknowledge the reality of how scary life in the U.S. is for so many Black Americans, as they are more than three times more likely to be killed by police than white Americans, according to a recent study from Harvard University that Stephanopoulos cited during in the town hall.

Trump claims current US problems are products of Democratic leadership

On multiple fronts, Trump tried to push any blame off himself and onto Democrats.

After saying he wants to see another stimulus bill to address the economic hardships facing so many Americans because of coronavirus, Trump was asked why he wouldn’t call House Speaker Nancy Pelosi to his office to negotiate.

Stephanopoulos asked Trump about his promise to “restore law and order” in the country, which he made during his 2016 convention speech, and again at the Tuesday town hall.

“And I have! Except in Democrat-run cities,” Trump said. “Wherever you have a Democrat city — not in all cases — but if you look at the really troubled cities in our country, they’re Democrat-run.”

On the coronavirus, in an attempt to illustrate his quick response, he pointed the finger at Pelosi and Biden.

“I was so far ahead of my closing and I’ll give you an example. When I closed at the end of January, Joe Biden was talking about, in March, about, it’s totally over-exaggerated. Nancy Pelosi was standing in the streets of Chinatown in San Francisco, late, a month, more than a month after that, saying this thing’s totally exaggerated,” Trump said.

And on Scott’s police reform bill being unable to pass the Senate, Trump claimed Democrats agreed with the bill, but they didn’t vote for it because they were “viewing this as a political issue.”

In a powerful and passionate exchange about her lifelong health struggles, Ellesia Blaque, an assistant professor from Philadelphia, politely yet bluntly, asked the president to “please stop” interrupting her.

“Let me finish my question, sir,” Blaque said, as she described a life of overcoming the odds, battling an inflammatory disease called sarcoidosis that deemed her “uninsurable” from the day she was born, but still going on to get a bachelor’s degree, master’s degree and a PhD.

Blaque vouched for the importance of Obamacare, which allowed for people with preexisting conditions to qualify for health care at the same rate as everyone else.

“Within a 36 to 72 hour period, without my medication, I will be dead. And I want to know what it is that you’re going to do to assure that people like me, who work hard, we do everything we’re supposed to do, can stay insured? It’s not my fault that I was born with this disease,” Blaque said.

Her question highlighted an issue that millions of Americans called their top priority before the pandemic spread: the debate over public and private health insurance. But despite the pandemic, not much about the argument has changed.

“It’s a total disaster. You’re going to have new health care, and the preexisting condition aspect of it will always be in my plan,” Trump said, repeating a pledge about a health care plan he has yet to disclose during his entire first term, even after consistent attempts to strike down the option of Obamacare.

Stephanopoulous pushed Trump to answer for his attempts to repeal Obamacare — along with its coverage for people with preexisting conditions — without any public plan to replace it. Trump repeated that his plan would be better.

“But you haven’t come up with it,” Stephanopoulos said.