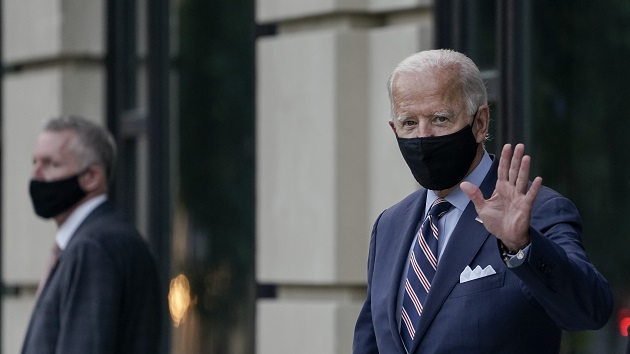 (WASHINGTON) — Former Vice President Joe Biden is not ruling out the possibility of instituting a federal mask mandate if elected in November to deliver on previous calls for nationwide mask use as the country continues to grapple with the impacts of COVID-19.

“Our legal team thinks I can do that based upon the degree to which there’s a crisis in those states, and how bad things are for the country, and if we don’t do it, what happens,” Biden said of his ability to act federally if states decline to take action.

“The question is whether I have the legal authority as president to sign an executive order. We think we do,” Biden later added, stressing that he would make the case along with scientists to both Republican and Democratic governors about the necessity of a mandate before acting federally.

The comments further highlight the deep divide between Biden and President Donald Trump on the issue of masks as the 2020 election enters the final stretch, and the coronavirus pandemic has claimed the lives of nearly 200,000 Americans.

While the recommendation to wear a mask is now almost unanimous among health experts, including some of the president’s own appointees, who have all been encouraging Americans to wear masks to curtail the spread of the disease, Trump seemed to question the guidance during an ABC News town hall Tuesday night.

“A lot of people don’t want to wear masks,” Trump told ABC News’ Chief Anchor George Stephanopoulos. “There are a lot of people think the masks are not good.”

“Who are those people?” Stephanopoulos pressed.

In a press conference Wednesday, Trump doubled down on his criticism of masks.

“Masks have problems too. And I talked about the masks — have to be handled very gently, very carefully. I see that in restaurants there are people with masks and they are playing around with their masks and they have it — their fingers are in their mask and then they are serving with plates. I mean, I think there’s a lot of problems with masks,” the president told reporters at the White House.

Biden fired back at Trump’s comments Tuesday, arguing that he is “undercutting the easiest, most effective means we have for reducing the spread of this disease,” and responded to the president’s remarks that he had not followed through on his call for a mask mandate.

“I found it fascinating the president said, … ‘Biden didn’t put in a mask mandate,"” Biden said of Trump’s comments during the town hall Tuesday.

In his remarks,Biden also referenced Centers for Disease Control and Prevention Director Dr. Richard Redfield’s comments Wednesday that mask use could do more to guarantee protection from COVID-19 than a possible vaccine — comments the president contradicted in a press conference Wednesday evening.

“(Masks are) not more effective by any means than a vaccine. And I called him about that,” Trump said of Redfield.

Nor’easter to bring heavy rain, strong winds and snow to Northeast
From buzzing bees to solar panels: Inside Bentley’s green shift
What Congress’ vote to decriminalize marijuana means for you
House votes to federally decriminalize marijuana
How House Republicans could mount last-ditch effort to contest election results
Chadwick Boseman to be posthumously honored during ‘MTV Movie & TV Awards: Greatest of All Time’