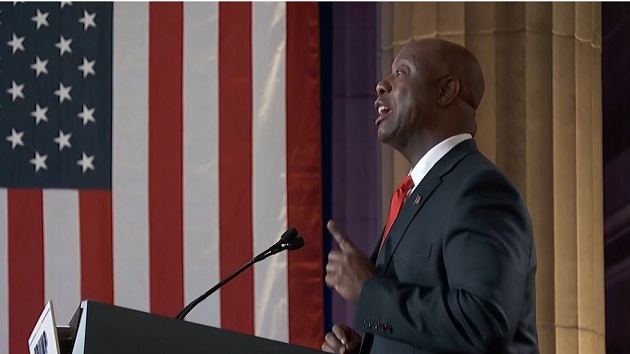 (WASHINGTON) — House Republicans on Tuesday unveiled their election-year agenda, a platform lawmakers hope will help Republicans move closer to retaking at least 17 seats and flipping the House in November.

The “Commitment to America” agenda revolves around three themes pertaining to the economy, the coronavirus response, and the “American Dream,” with priorities of tax breaks and police funding seen as a crucial part of the agenda.

“Republicans helped build the greatest economy in a generation and the American way of life was thriving,” House Republican Leader Kevin McCarthy, R-Calif., said Tuesday while standing next to dozens of GOP lawmakers on the steps of the Capitol.

The platform evokes similar projects from previous GOP leaders — such as Newt Gingrich’s “Contract with America” and the 2010 “Pledge to America” for Republicans who helped them flip the chamber in 1994 and 2010.

But unlike those plans, which were meant to sharpen contrasts with Democrats who controlled the House and White House — this new effort also resembles Speaker Paul Ryan’s “Better Way” agenda in 2016, which sought to unite Republicans under a broad governing blueprint as they tried reconciling their agenda with President Donald Trump’s unconventional proposals and polarizing campaign.

In their proposal, Republicans pledge to triple coronavirus testing, facilitate the development of vaccines and therapeutics for COVID-19, and shore up the national stockpile and supply chain while reducing the economy’s dependence on China.

Their plan also vows to protect pre-existing conditions, something the conference and the Trump administration have opposed throughout their efforts to dismantle and repeal Obamacare, without including a specific alternative.

During the press conference, McCarthy and other GOP leaders accused House Democrats of undermining law enforcement and facilitating riots in cities across the country this year, tying former vice president and Democratic presidential candidate Joe Biden’s largely moderate general election campaign to the progressive wing of the Democratic Party calling for the defunding of police.

Republicans also pledged to protect Social Security, Medicare and reduce the national debt — ignoring spending increases under Trump, and his push for a payroll tax cut that could impact a funding stream for Social Security if made permanent.

The Republicans’ platform pledges to boost funding for police departments but makes no mention of specific proposals to address racial inequality, at a moment when the nation is grappling with systemic racism. It endorses GOP Sen. Tim Scott’s policing plan, which lacked bipartisan support in the Senate and also endorses Opportunity Zones, the federal program to encourage development in low-income communities that was a piece of the GOP’s 2017 tax law.

The Republicans’ unveiling comes as House Democrats are vowing to try again to pass another round of coronavirus relief while negotiations with the Senate and the administration remain at a standstill. House Speaker Nancy Pelosi said she plans to keep the House in session until legislation is passed.

Former astronaut Mark Kelly to be sworn in as Arizona’s newest US senator
Freeze warning and wind chill alerts in Florida, new snowstorm for Central US
Amid COVID-19, moms leaving the workforce could have lasting impact on economy
‘The Bachelorette’ recap: Increasing tension between two men leaves Tayshia with a tough decision
Trump-Biden transition updates: Trump teases 2024 presidential run at Christmas party
Captain charged with seaman’s manslaughter in California boat fire that killed 34