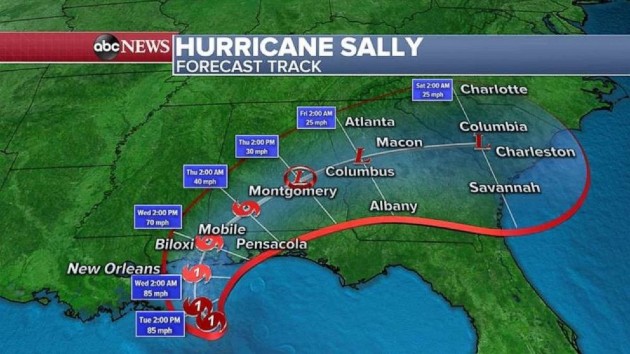 Sally is expected to crawl very slowly across the northern Gulf of Mexico over the next 24 hours and will make landfall some time Wednesday morning with possibly Category 1 hurricane winds near 85 mph.

As Sally makes landfall on the Alabama and Mississippi border on Wednesday, the highest storm surge should be from Louisiana into Mississippi and east to Mobile Bay, Alabama, where the water is expected to rise 6 to 9 feet.

Storm surge of up to 4 feet is possible even in Florida and parts of Louisiana’s Lake Pontchartrain, which is located on the northern side of New Orleans.

Rainfall totals could reach near 30 inches in eastern Mississippi, Alabama and into the Florida panhandle.

Sally will then crawl inland over Alabama and Georgia, where historic rainfall and flooding are possible.

Up to a foot of rain could fall from central Alabama to Georgia and northern South Carolina, including Atlanta and even into Charlotte, North Carolina, where major flash flooding is expected.

Sally is the seventh hurricane so far this season; the average at this time is six.

Sally will be third hurricane making landfall along the Gulf Coast this season.