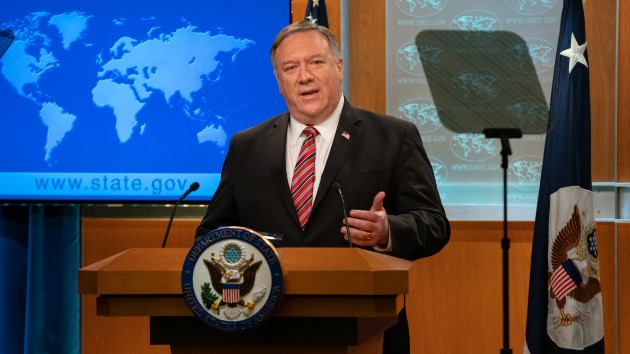 (WASHINGTON) — Months of tension between House Democrats and the State Department are set to spill out into public display on Wednesday when senior department officials testify about the firing of the agency’s inspector general.

President Donald Trump’s removal of the federal watchdog at the request of Secretary of State Mike Pompeo came as the independent office was investigating Pompeo and his wife leading to accusations of retaliation that the Pompeos have denied.

Those accusations were revived on Friday after the House published a transcript of two top Pompeo aides’ closed-door testimony.

The House Foreign Affairs and Oversight Committees’ Democratic chairs have been investigating several allegations against the top U.S. diplomat, including his unprecedented speech to the Republican National Convention, his cooperation with a Republican-led Senate investigation of Trump’s opponent Joe Biden and his private dinners at the State Department for elite guests.

Inspector general Steve Linick was fired in May. At the time, Pompeo confirmed he requested to have Linick removed and accused him of leaking or “investigating policies he simply didn’t like.”

Linick’s office was investigating allegations of the Pompeos’ use of career staff to run personal errands, the secretary’s use of an emergency authority to bypass Congress and sell arms to Saudi Arabia, the department rescinding an award to a Finnish journalist who criticized Trump and allegations of “workplace violence” in the Office of the Chief of Protocol.

Pompeo has denied that Linick’s firing was retaliatory — at first saying he was unaware of any investigations and then saying while he answered questions about the arms sale probe, he didn’t know the full scope.

Stephen Akard, a longtime aide to Vice President Mike Pence who had served as acting inspector general after Linick was fired, told the House committees that “Pompeo was interested in the release of” the OIG’s Saudi arms sale probe, but that he had recused himself from it. As a political appointee who still served as director of State’s Office of Foreign Missions, he wanted to avoid any potential conflicts of interest before resigning in August.

Akard’s sworn affidavit, released by the committee Monday, is the latest participation by a department official in the committee’s probe. Its chair, Rep. Eliot Engel, D-N.Y., released transcripts Friday from two top Pompeo aides, a longtime confidante Toni Porter and a career official Lisa Kenna, who serves as executive secretary, a key gatekeeper for a secretary of state.

Porter told the committees that she was interviewed two weeks ago by the Office of Inspector General about “misuse of government resources” by Pompeo and his wife Susan — an investigation that remains ongoing. While Porter said she at times took “direction” from Susan and had to schedule personal dinners or travel, she only noted one time she was uncomfortable doing so.

“On two occasions, I assisted with personal Christmas cards for the Pompeos,” she told the committee, which made her uncomfortable “because I was at the State Department” and working in an official capacity.

On Sunday, McClatchy published emails that showed Susan Pompeo asking Porter to help with the cards and Kenna expressing concern to Porter about “asking others for personal things.”

A State Department spokesperson defended Susan Pompeo’s role at the agency, writing, “We are beyond proud and honored to have Mrs. Pompeo, and all diplomatic spouses, give so much time, voluntarily, to ensure we here at State are One Team with One Mission. All her service is not only legal, but admirable.”

Secretary Pompeo went a step further, telling Fox News on Monday that Porter’s work on the Christmas cards was “lawful and appropriate.”

“Everything we’ve done was for the betterment of the State Department,” Pompeo said in the interview. “The fact that they’re picking on my wife, who has done yeoman’s work as a volunteer to try and make life better for every officer at the State Department, I find pathetic and sad.”

Retailers stock up on smaller turkeys for Thanksgiving due to pandemic
Election 2020: How to spot voter intimidation and what to do
How to keep your newborn baby healthy during COVID-19 pandemic
For people with Down syndrome, the best medical information is now automated
‘Dancing with the Stars’ season 29 recap: Nev Schulman earns a perfect score while Monica Aldama sent home
Following confirmation to Supreme Court, Barrett takes first oath at White House