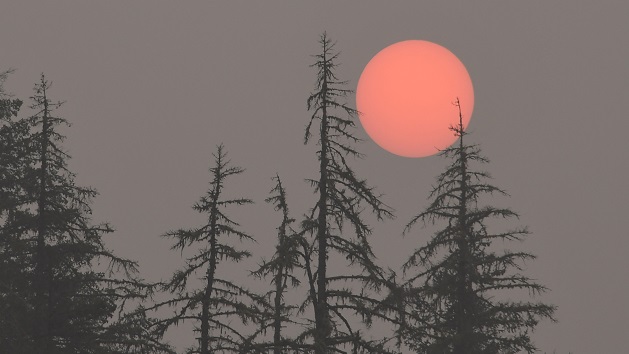 By HALEY YAMADA and MICHAEL MENDEHLSON

(LOS ANGELES) — Families are mourning the loss of loved ones after at least 27 people have been killed in the wake of more than 70 devastating wildfires raging out of control on the west coast.

Josiah Williams, a 16-year-old from Berry Creek, California, died while trying to evacuate from the fires. His aunt told ABC’s “World News Tonight” that she doesn’t blame anyone for the tragedy.

Milicent Catarancuic died in the North Complex Fire. Her sister, Susan, is one of dozens who are still missing. Their family, who has been grieving for their loss, said that the two sisters just didn’t know how fast the flames were moving.

“What they didn’t know is that there is a wall of flame moving at them at over 1,000 yards an hour. I don’t think they understood that,” said Millicent Catarancuic’s son, Zygy Roe-Zurz.

In the wake of the West Coast inferno, a thick blanket of smoke has created a health hazard for millions. Satellite images have shown the massive smoke clouds spreading all the way across the country, reaching as far as New York.

“It’s difficult to tell at first who has COVID-19 and who has irritant from the pollution,” said Dr. Peter Hakim, an emergency room doctor in Portland, Oregon. “We’re seeing a lot more people with productive coughs, dry coughs [and] shortness of breath.”

Due to the smoke, Portland declared the worst air quality of any major city in the world, according to IQAir. The city handed out 250,000 N95 masks to residents and told people to stay indoors, reported ABC affiliate KATU2.

Wildfire smoke is a mix of gases and fine particles from burning vegetation, building materials, and other materials. Wildfire smoke can make anyone sick. Even someone who is healthy can get sick if there is enough smoke in the air, according to the Centers for Disease Control and Prevention.

The CDC also warned that older adults, pregnant women, children, and people with preexisting respiratory and heart conditions may be more likely to get sick if they breathe in wildfire smoke.

Seattle is also stifled by the smoky conditions, which are affecting those already impacted by the COVID-19 pandemic.

California Gov. Gavin Newsom has said it’s urgent to address climate change. Newsom has sparred with President Donald Trump over differing views on how to put out the state’s wildfires after Trump criticized the state’s approach to managing its forests and threatened to withhold federal funding.

“I quite literally have no patience for climate change deniers. You may not believe it, intellectually, but your own eyes tell a different story, particularly here in the state of California,” he said this week. “Never have I felt more of a sense of obligation and purpose to maintain California’s status in terms of addressing climate change head on.”

3 dead, including suspect, 2 injured after ‘horrific’ shooting, fire in Maryland
First responders talk about the often-hidden pain and trauma of working in a pandemic
Baker donates cakes to families that lost children for Mother’s Day
Gloria Estefan says ‘Father of the Bride’ remake will “celebrate cultures in a wonderful, warm, deep way”
Fans mourn ‘Spider-Man 4’, which would have turned 10 on Thursday
Boulder officer won’t face charges for shooting suspect in grocery store massacre: DA