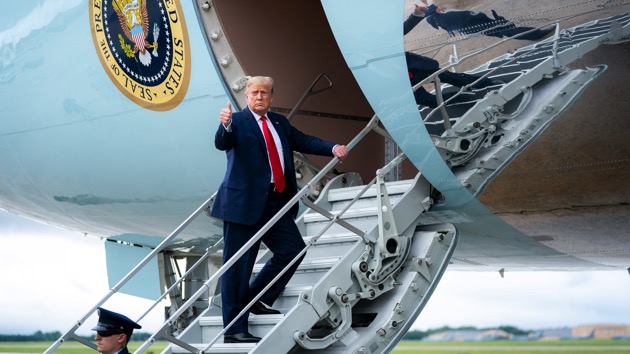 (WASHINGTON) — President Donald Trump on Monday expressed skepticism about the science behind climate change during a briefing in California on the raging fires that have brought devastation to the western coastal states in recent weeks.

While the Democratic governors of the impacted states say the fires represent the latest piece of hard evidence that global warming is a scientific reality impacting their communities, Trump renewed his history of expressing skepticism on the science of climate change and argument that forest mismanagement is the primary culprit for catastrophic fires in recent years, contrary to evidence.

At the briefing near California’s capital, Sacramento, the state’s secretary for natural resources took the president to task over his climate skepticism.

“We want to work with you to really recognize the changing climate and what it means to our forests, and actually work together with that science,” the secretary, Wade Crawfoot, told Trump. “That science is gonna be key because if we — if we ignore that science, and sort of put our head in the sand and think it’s all about vegetation management, we’re not going to succeed together, protecting Californians.”

“It’ll start getting cooler,” Trump shot back, despite experts saying otherwise. “You just — you just watch.”

“I wish science agreed with you,” Crawfoot replied.

But the science behind global warming has become widely accepted in recent years. Standing amid ash and ruin on Friday, California Gov. Gavin Newsom said the historically devastating fires that have recently ravaged his state stand as a case study for the reality of the scientific warnings around climate change and blasted the “ideological BS” of those who would deny it.

“The debate is over around climate change. Just come to the state of California. Observe it with your own eyes,” Newsom said while standing amid an ashen haze.

Newsom raised the issue with Trump at Monday’s briefing, too.

“We come from a perspective, humbly, where we submit the science is in and observed evidence is self evident that climate change is real,” he said.

On ABC’s “This Week” Sunday, Washington Gov. Jay Inslee slammed Trump for his comments redirecting blame for the wildfires away from climate change.

“We know that climate change is making fires start easier, spread faster and intensify. And it is maddening right now that when we have this cosmic challenge to our communities, with the entire West Coast of the United States on fire, to have a president to deny that … these are climate fires,” Inslee told ABC News Chief Anchor George Stephanopoulos on Sunday.

Oregon Gov. Kate Brown said Sunday the fires should serve as a “wake-up call” that the scientific phenomenon is happening.

“This is truly the bellwether for climate change on the West Coast. This is a wake-up call for all of us, that we have got to do everything in our power to tackle climate change,” Brown said in an interview with CBS News, adding that “decades of mismanagement of our forests in this country” has also contributed to the historic catastrophe unfolding now in her state.

Trump, who once called climate change a “hoax” and in 2012 dismissed it as a concept “created by and for the Chinese in order to make U.S. manufacturing non-competitive,” told FOX News’ Chris Wallace in 2018 that “maybe” climate change “contributes a little bit” to the trend of historic fires in recent years but has emphasized forest management above all else.

The president reprised the line of attack during a campaign rally in the battleground state of Pennsylvania last month, suggesting that “maybe we’re just going to have to make them pay for it because they don’t listen to us.”

“I see again, the forest fires are starting. They’re starting again in California. I said, ‘You got to clean your floors. You got to clean your forests.’ They have many, many years of leaves and broken trees. And they’re, like, so flammable. You touch them and it goes up. I’ve been telling them this now for three years, but they don’t want to listen,” Trump said.

He repeated that message on Monday after arriving in California, telling officials they should “clean” the forest floors to safeguard forests from dry leaves and fallen, “explosive” trees that ignite “like a matchstick.”

As ABC News has reported, there is strong evidence wildfires have become larger and more destructive due to climate change. Warmer temperatures and heat waves have caused droughts and other conditions like bark beetles that kill millions of trees, creating more dry fuel for a fire to spread. Expanding development has also put buildings and neighborhoods closer to forests and areas prone to wildfires, making fires more destructive and putting more people in harm’s way.

The president’s visit to California was announced Saturday and comes as the president was already in the western region of the country to campaign and fundraise, with two months to go until the election.

Speaking about his upcoming trip while at a rally in Nevada Saturday night, the president urged his supporters to “remember the words, very simple, forest management” and said “it’s about forest management and other things.”

Republicans prepare for post-Election Day legal fights in battleground states
Officer involved in Breonna Taylor shooting sues Taylor’s boyfriend, Kenneth Walker
US produced more plastic waste in 1 year than any other country on Earth: Study
Christmas on the couch: ABC announces lineup of holiday programming
Halloween inspo: Mindy Kaling dresses up as Devi from her show ‘Never Have I Ever’
Omari Hardwick and Loretta Devine agree that laughter was their best medicine in their new horror film ‘Spell’