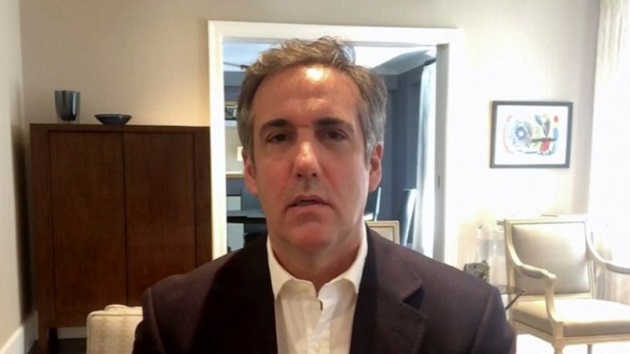 “I am explaining to people that this is the real Donald Trump,” Cohen, speaking from home confinement, told “The View.” “The whole purpose of ‘Disloyal’ is to get people to open up their eyes and to see the individual for who he really is.”

Cohen served as Trump’s personal attorney for over a decade and was a vice president of the Trump Organization.

When pressed by co-host Meghan McCain on why the public should trust Cohen now, he said his days of lying for the president were over.

“You need to look at what the lies were all about — they were for the benefit of Donald Trump,” replied Cohen, claiming his actions were akin to Stockholm syndrome. “My need to please him was greater than my ability to control my own moral compass.”

A recent Vanity Fair article alleges that President Trump made sexually offensive comments about Cohen’s daughter, Samantha, who was 15 years old at the time.

“How could you let that slide?” asked co-host Joy Behar.

“I knew it was wrong. I would have never allowed anyone to speak about her that way… but I was part of the cult and there really was no wrong that he could do,” Cohen said.

He went on, “I would have liked to have smacked him on the side of his head.”

White House press secretary Kayleigh McEnany dismissed Cohen’s claims Monday morning. “Michael Cohen is a disgraced felon and disbarred lawyer, who lied to Congress. He has lost all credibility, and it’s unsurprising to see his latest attempt to profit off of lies,” she said in a statement.

Cohen urged Americans to vote against Trump in the upcoming election.

“I steered a man into the White House who’s absolutely morally bankrupt and he is just not the right man for the job,” he said.

Cohen, in his book, wrote that Trump’s disdain for former President Barack Obama was so extreme that he hired a “Faux-Bama” to participate in a video in which Trump “ritualistically belittled the first black president and then fired him.”

“I don’t believe he liked Obama because Obama is [smarter] than he is,” Cohen said. “Why does he despise him to the extent that he does? I believe it is purely racial.”

Cohen was also pressed on his past treatment of Stormy Daniels, for whom he facilitated hush money to cover up an alleged affair between her and Trump. Cohen had berated Daniels with negative comments in the media when the payments were uncovered.

Cohen, who is serving a three-year sentence for violating campaign finance laws and lying to Congress, was ordered back to the federal facility in Otisville, New York, on July 9 after spending two months on furlough in home confinement. The Federal Bureau of Prisons said a clause in Cohen’s home confinement agreement forbade him from speaking with the media, including through a book. Cohen, however, contended in a lawsuit that he was being retaliated against by the federal government, which objected to his tell-all book about Trump. The judge sided with Cohen and he was later released again to serve the rest of his sentence in home confinement.

“It was retaliatory, it was — it violated my constitutional right,” Cohen said on his abrupt return to prison. “I just seem to be the only one suffering consequences and apologizing for my actions.”