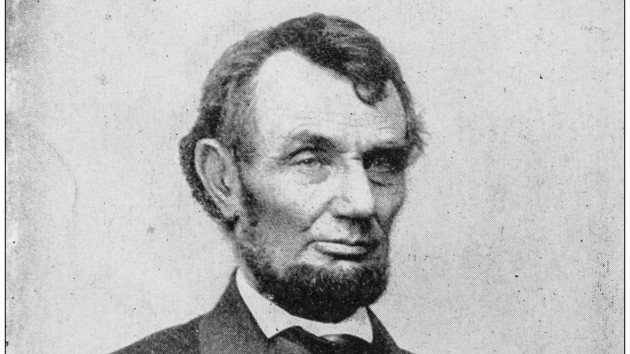 (BOSTON) — A lock of Abraham Lincoln’s hair that was taken from him during his postmortem examination more than 155 years ago has sold at auction for $81,250.

The thick lock of hair approximately two inches long was sold at an auction that ended on Saturday along with a blood-stained telegram about his assassination at Ford’s Theater on April 14, 1865 to an undisclosed buyer, according to RR Auction of Boston.

According to the auction house, the lock of hair was presented to Dr. Lyman Beecher Todd, a cousin of Mary Todd Lincoln.

“The hair is mounted to an official War Department manuscript telegram sent to Dr. Todd by George H. Kinnear, his assistant in the Post Office at Lexington, Kentucky, received in Washington at 11 PM on April 14, 1865,” RR Auction said in the description of the item.

“A typed caption prepared by Dr. Todd’s son reads, in part: ‘The above telegram … arrived in Washington a few minutes after Abraham Lincoln was shot. Next day, at the postmortem, when a lock of hair, clipped from near the President’s left temple, was given to Dr. Todd — finding no other paper in his pocket — he wrapped the lock, stained with blood or brain fluid, in this telegram and hastily wrote on it in pencil: ‘Hair of A. Lincoln,’” it added.

RR Auction vouched for the authenticity of the lock and telegram with supporting evidence from Dr. Todd’s son, James Todd, who wrote in a letter in 1945 that the hair clipping “has remained entirely in the custody of our family since that time,” but was last was sold in 1999, according to the auction house.

“Boasting excellent provenance from Lincoln’s family, this is a one-of-a-kind piece of history. In fine condition,” RR Auction said.

The 16th President of the United States was attending a performance of Our American Cousin at Ford’s Theater in Washington, D.C. on the night of April 14, 1865 when stage actor John Wilkes Booth shot him in the head while he was watching the play.

Lincoln, who was the first U.S. president to be assassinated, died the next morning at 7:22 a.m. in the Petersen House across the street from the theatre, ushering in a period of national mourning.

Woman shot with rubber bullet at protest said she’s not surprised to see officer exonerated
ABC News’ Linsey Davis on “savoring” special moments of motherhood with her third children’s book, ‘Stay This Way Forever’
Secretary of State making his first ‘trips’ to Mexico and Canada — virtually
US refugee agency for children at risk of maxing out capacity
Trailblazing beauty inventions and innovations made possible by people of color
Is Emma Watson retiring from acting?