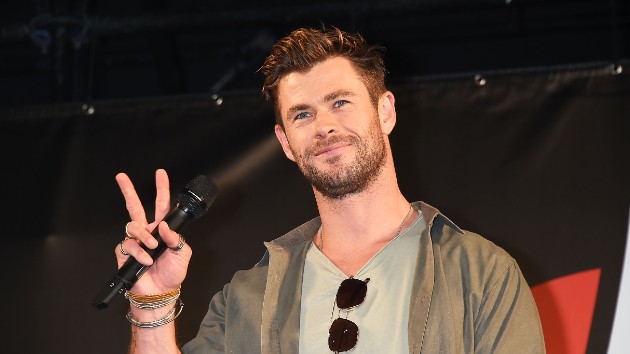 During a recent live Weekend Today report from a pasture, the Thor: Ragnarok star was captured on camera casually sauntering up to the field reporter before commandeering her microphone — all while the show’s in-studio hosts Richard Wilkins and Rebecca Maddern hilariously stare in shock from their seats.

“I heard you are looking for some horses. There is a bunch down here,” Hemsworth helpfully pointed out before being challenged to read off the weekend’s forecast.

“I often get teased about not having the best presenting skills or pronunciation, want to help me out?” reporter Lauren Phillips gestured to the Australian actor before handing over her script.

“Let’s mispronounce all of these,” the 37-year-old actor suggested before reading off the local temperatures and offering his own remarks for the unscripted weather report.

After being thanked by Phillips for “[making] my job look very easy,” she broached the question about what possessed the actor to visit a horse pasture in Scone, Australia…of all places.

As it turns out, he was lending a hand to the country’s ongoing conservation efforts.

The four continued to poke fun at each other, with Wilkins announcing that Hemsworth is “booked and we’ll see him same time tomorrow,” which caused Phillips to laugh over supposedly losing her job to the A-list actor.

“I’m only available for the next 35 seconds,” Hemsworth shot back. “Unfortunately, you’re gonna have to keep her.”  He then mollified while tapping Phillips on the shoulder, “Fortunately!  You love your job, don’t you?”

The surprise interview ended with the Men in Black star galloping away with the microphone as Phillips mock galloped behind him.

We get some help with weekend weather from the God of Thunder himself, Chris Hemsworth! #9Today pic.twitter.com/YsfCxADIiD