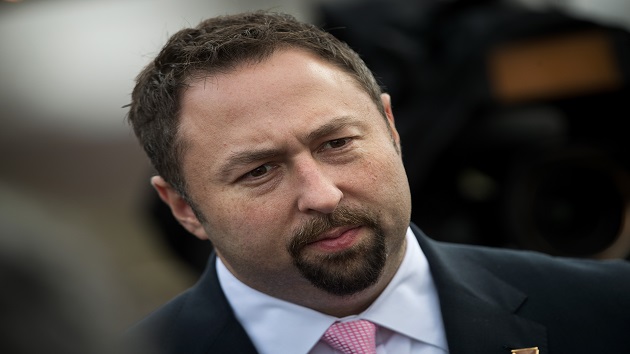 (WASHINGTON) — Less than two months away from a presidential election that most experts predict will be determined by President Donald Trump’s ability to defend the 2016 electoral map, one of Trump’s top advisers argued Sunday that the campaign is actually poised to go on the offensive.

After a rally in northern Nevada Saturday, and ahead of another outside Las Vegas on Sunday, Trump campaign senior adviser Jason Miller claimed on ABC’s “This Week” that their polling shows the president leading the Silver State.

“Over 20% of the people who are at (Saturday’s) event didn’t even vote in 2016,” Miller told ABC News Chief Anchor George Stephanopoulos. “That’s why our internal numbers show us actually winning Nevada. We’re very well positioned. It’s another blue state we’re going to flip this year.”

Miller’s claim is at odds with a recent New York Times/Siena poll conducted this past week showing Democratic nominee Joe Biden with 46% support, compared to Trump’s 42% support in the state. In Minnesota, another state won by Hillary Clinton in 2016 in which the Trump campaign hopes to be competitive, Biden was up 50-41 this week, according to a separate New York Times/Siena poll.

Trump also continues to trail Biden in nearly every national poll of the race. ABC News partner FiveThirtyEight’s forecast shows the former vice president winning three out of every four simulations of the election — a proportion that has remained relatively consistent throughout the summer.

On “This Week,” Stephanopoulos also challenged Miller about the president’s rhetoric regarding the coronavirus in recent days, particularly his claim that the nation is rounding “the final turn” of the pandemic — a notion disputed by top experts, including Dr. Anthony Fauci, the nation’s top expert on infectious diseases.

“Is the president still downplaying the severity of the virus?” Stephanopoulos asked.

“Joe Biden, I think, wants everyone to stay locked in their basement forever. President Trump wants to be safe, responsible, get us back up and this is the key,” he continued, referencing the former vice president’s comment to ABC News that he would shut the economy down during a potential second wave of coronavirus if scientists made such a recommendation.

Stephanopoulos noted that nuance in Biden’s position — his reliance on health experts, as opposed to a personal preference to shutter activity — to which Miller continued to voice disagreement.

“He hasn’t said who these scientists are. Even Dr. (Anthony) Fauci hasn’t said, ‘Go and shut it down,"” he said. “That’s not something that we need to do. What we need is to safely and responsibly move forward.”

Throughout the interview, Miller expressed confidence that a coronavirus vaccine will be ready “this calendar year,” at one point speaking as if an inoculation in 2020 was a certainty. His position echoes Trump, who predicted a vaccine “before the end of the year and maybe even before November 1st” at a press briefing two weeks ago.

“I think we can probably have it sometime in October,” Trump said, at the time.

“Think how remarkable this is for a moment, George. The fact that we’re going to have a vaccine the same year we’re getting hit by this global pandemic, this is unheard of,” Miller said on “This Week” Sunday.

As of Friday, three vaccines anticipated to be available for U.S. distribution are in Phase III efficacy trials, and top public health experts, including Fauci and FDA Commissioner Dr. Stephen Hahn, have refused to offer predictions about when they may become available to the public.

Miller took issue Sunday with comments by Biden’s running mate, Sen. Kamala Harris, D-Calif., who expressed skepticism last week about any vaccine released prior to the election. She “would not trust Donald Trump” and “will not take his word for it.” She added that she would rely on “a credible source of information that talks about the efficacy and the reliability of whatever he’s talking about.”

“The fact of the matter is that Americans know that President Trump, as a businessman, as someone who cuts through all the bureaucratic nonsense, is pushing this ahead,” Miller said.

An additional source of controversy in the campaign in recent weeks has been Trump’s repeated claims that the election is being “rigged,” an allegation he made again Saturday in Nevada without evidence, while casting doubts on the legitimacy of mail-in ballots. As a remedy, the president has urged his supporters to verify that their ballots are processed and suggested they vote twice — both by mail and in-person — despite there being other ways to track votes without showing up at the polls.

“Why is the president telling people to vote twice since it’s a felony?” Stephanopoulos asked Miller Sunday.

“The president is not telling people to vote twice,” Miller responded, despite the president’s statements to the contrary. “What he is saying is vote, vote early, whether it be by absentee, whether it be early voting that’s in-person, and then make sure that your vote is counted, either call or show up to the registrar, call or show up to the polls, make sure that your vote has been recorded and counted.”

Stephanopoulos also cited the latest campaign finance figures, pressing Miller on the $150 million fundraising advantage the Biden campaign accumulated in August, and the Trump campaign being outspent in television advertisements by a four-to-one margin. Republican National Committee Chairwoman Ronna McDaniel has reportedly expressed dissatisfaction to the president regarding his absence from the airwaves in several crucial states. Miller pledged a “big increase” in spending this week, including ads in Arizona and Pennsylvania, and said that despite the current numbers, the president is still in a better position than he was four years ago when he was still ultimately victorious.

“Look, we were outspent big league in 2016 and President Trump whooped on Hillary Clinton, so it was an absolute great victory,” he said. “It doesn’t matter what the Democrats try to spend this year because we’re going to have plenty of money to go and run a successful campaign.”